Scotty turns the corner, on his way out our side-exit for a regular smoke break.  “There’s some guy out there,” he tells us in the Creative department here at The Hundreds Homebase.  WUBBA WUBBA WUBBA:  A helicopter – a ghetto-bird – hovers overhead. We pop the door open to a street full of police squad cars and SUVs, Vernon officers with their guns drawn, the crackling of their walkie-talkies, and the anxious hum of unsettled air.  “Right over there!” Scotty says again, “he’s hiding right in front of the door!” 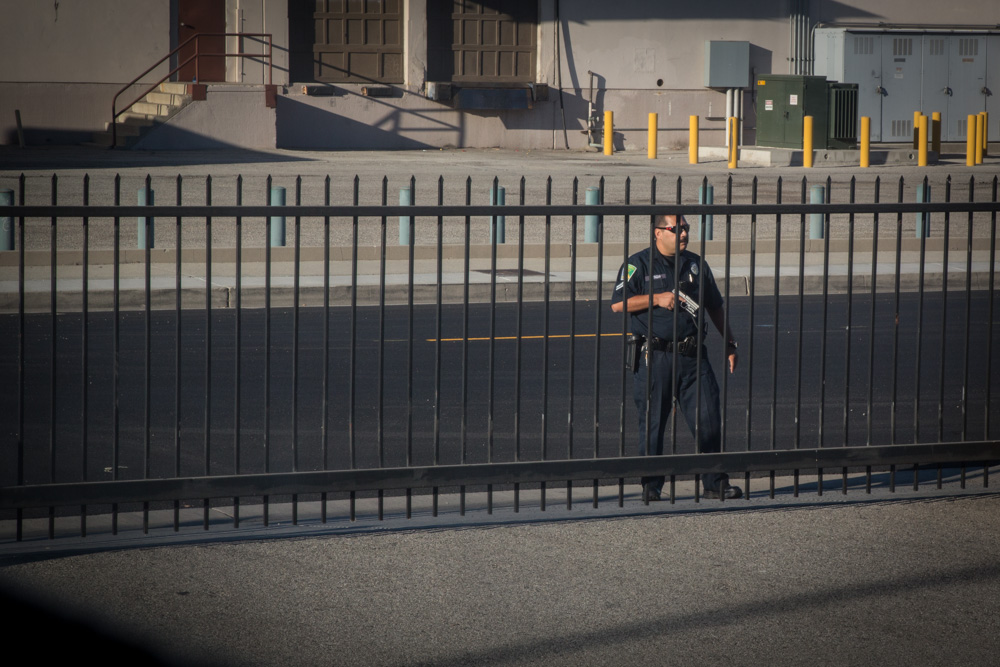 As it turns out, Scotty was initially headed out the front entrance for his hourly cigarette when he opened the door on this guy, prostrate and frozen.  The man slowly moved his finger to his lips, gesturing silence.  Scotty immediately closed the door and looked back at Brezil, our receptionist.  “I don’t know what he’s doing,” she said, “I just saw him run up and lay down there.” 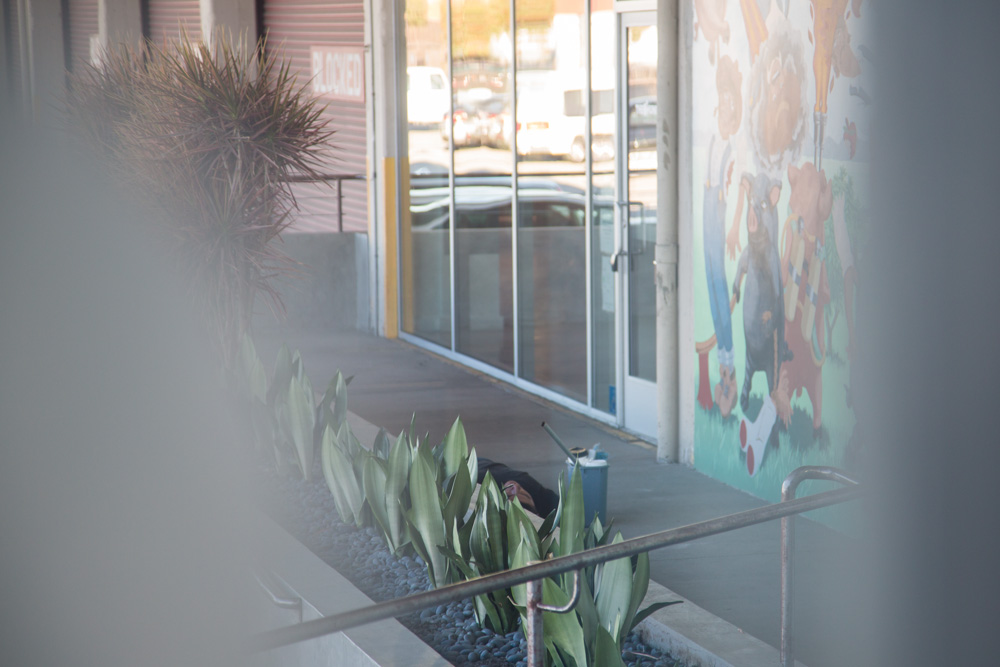 Brezil runs to Ben on the other side of the office – the Sales, Accounting, and Warehouse arm, “There’s a man… police… guns…” and immediately the bossman’s on the loudspeaker.  It’s the end of the world, folks.  Stay put, lock your doors, hide yo’ kids, hide yo’ wives.  But of course, everyone pops their head up from their cubicles like prairie dogs, runs to the windows to catch a glimpse of the sociopath and Instagram what comes next.

Meanwhile, Scotty runs back over to our side and breaks down what’s going on.  We’re a little confused – sure, maybe a tiny bit scared – until a cop springs from behind a civilian vehicle parked across the way, firearm in the air, and shouts at us to get back inside.  It dawns on me – if there are this many cops with this many guns, that must mean that whoever this dude is… is probably armed.

I instantly retreat back inside, run upstairs and… grab my camera.  I find the nearest office to what’s happening (which happens to be our Creative Director Patrick’s), grab a chair to stand on and angle my lens out the high window. 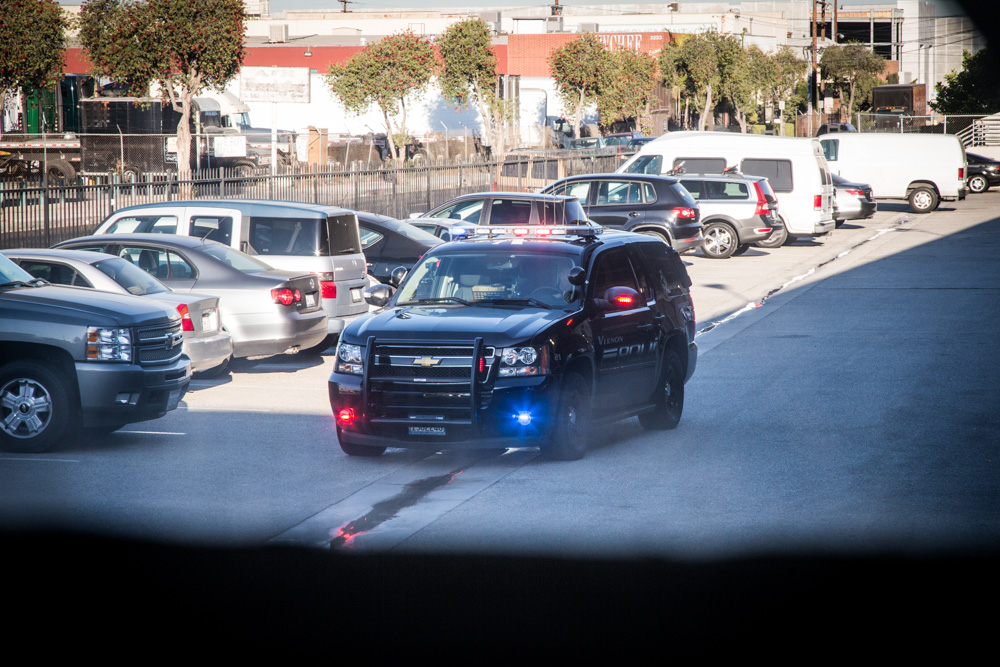 For some reason, some of the black-and-whites peel off, but not before the K-9 arrives.  The loyal canine stands tall and alert and for a moment, it seems like everything’s gonna be alright. Or go terribly wrong. 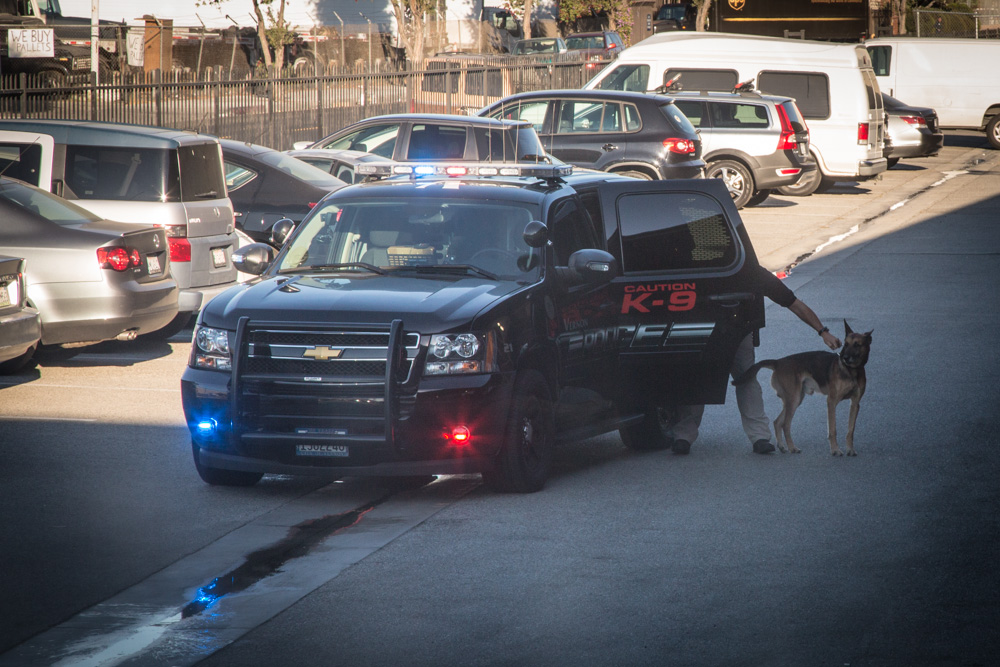 We know this cop.  He always comes around.  I’m blanking on his name, but he’s always been kind and respectful towards us, and clearly takes his job seriously. That being considered, I know homeboy’s not effing around.  He draws his weapon in one fluid movement, poised and direct, without a hint of mercy.  The officer calls out to the suspect, cautioning him that both of his little friends here are a little jumpy. 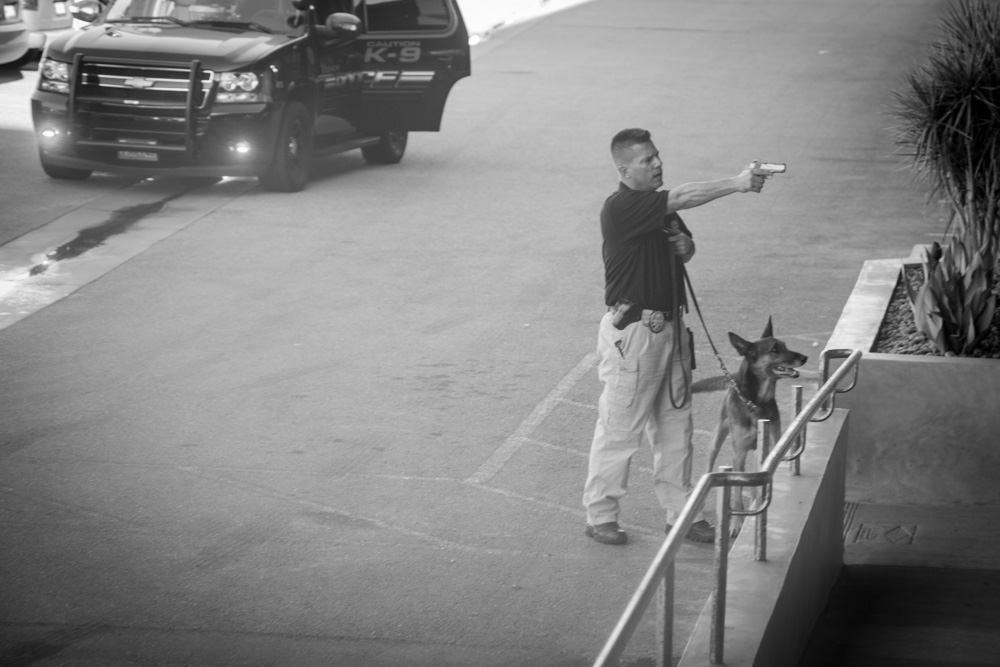 We all hold our breath.  The suspect could pull out a gun, toss a grenade, take one to the dome.  He could break in and hold us hostage or feed his forearm to a bloodthirsty beast… But what he chooses to do – at the last minute – is levitate his arms and sit up.  He’s giving up.  It’s over. 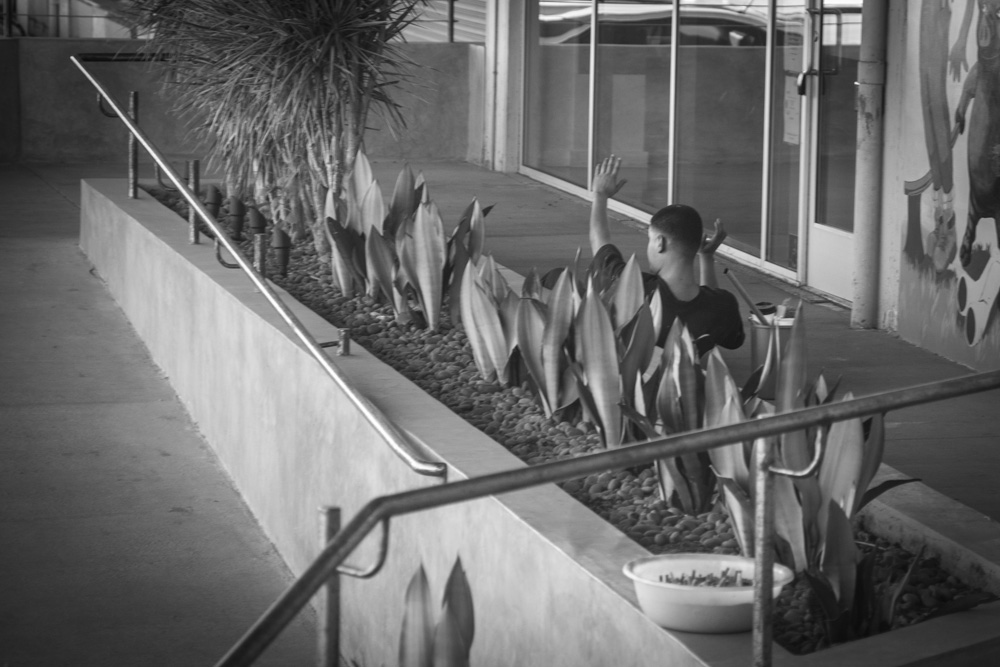 It’s weird.  As if he’s done this before.  Too comfortable and casual about this whole thing. His arms don’t even stay up for long as he makes his way down our front stairs.  I start to think all sorts of things.  What’s this guy thinking? What was he doing??  Where is he going???

What happened in his life today that he started out his morning waking up like everyone else, but having it end like this? 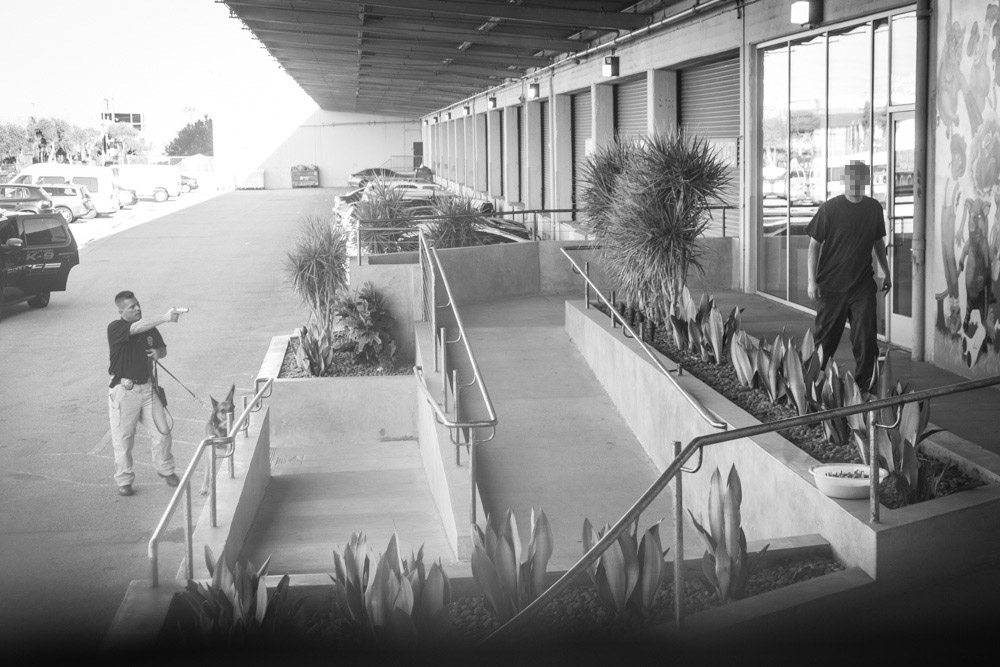 The forfeit.  The defeat. 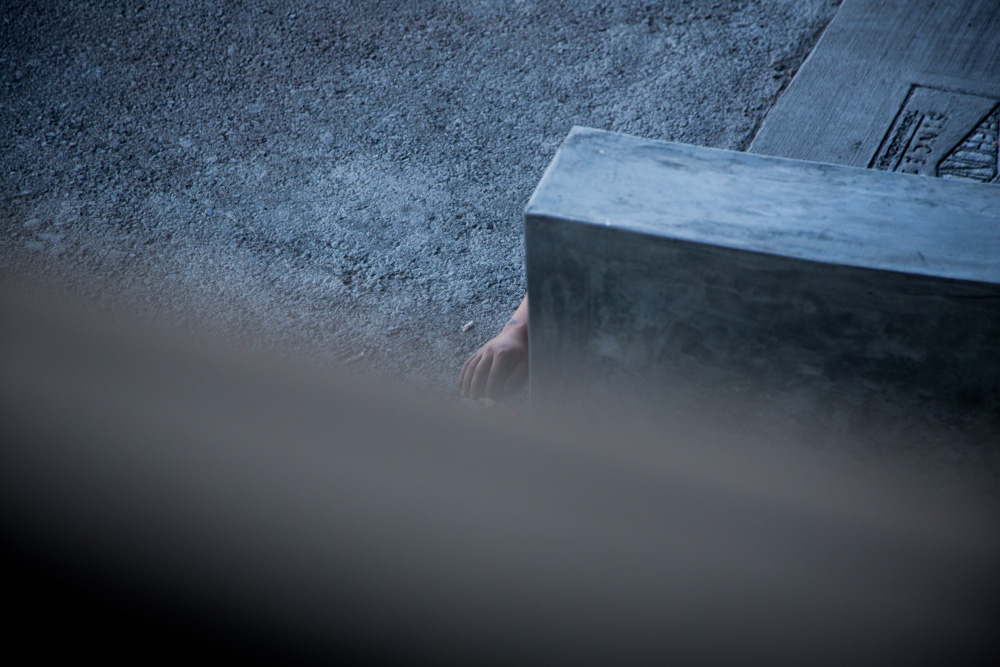 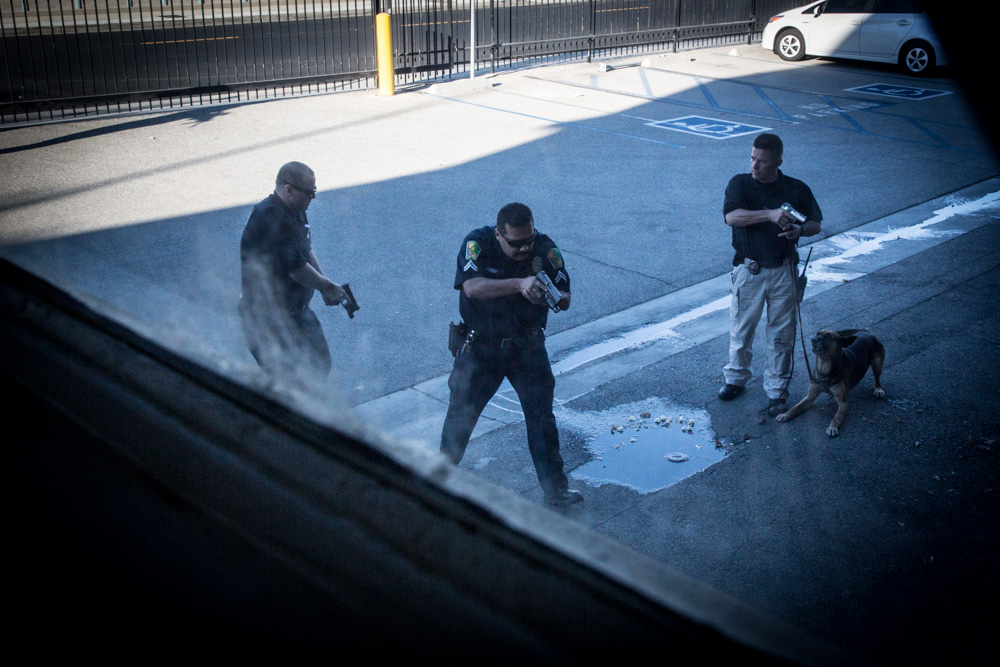 He was one of three.  They were evading police for God-knows-what when their car careened and dove right into our corner.  One of the guys is unaccounted for, the second jumps out, and runs behind our print shop Mixed Media Productions.  He approaches Nick and mutters something under labored breath.  “What?” Nick asks, “Are you looking for someone?”

“I said, ‘Can I run through your warehouse?!'” the man demands.

The suspect curses and gives Nick the stink-eye and stealthily moves towards one of the far entrances to our building.  Just then, three shields chase him across the yard and over a fence.

Meanwhile, the third suspect ditches the distressed car and bolts into our parking lot, up to our front entrance, before flipping onto his back and meeting Scotty’s confused face. 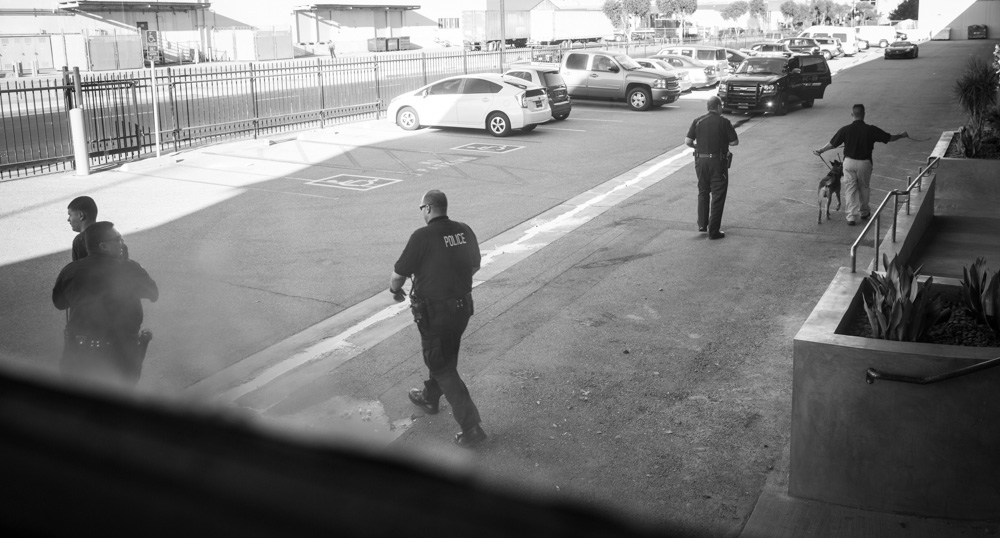 This is on a Monday in Los Angeles. 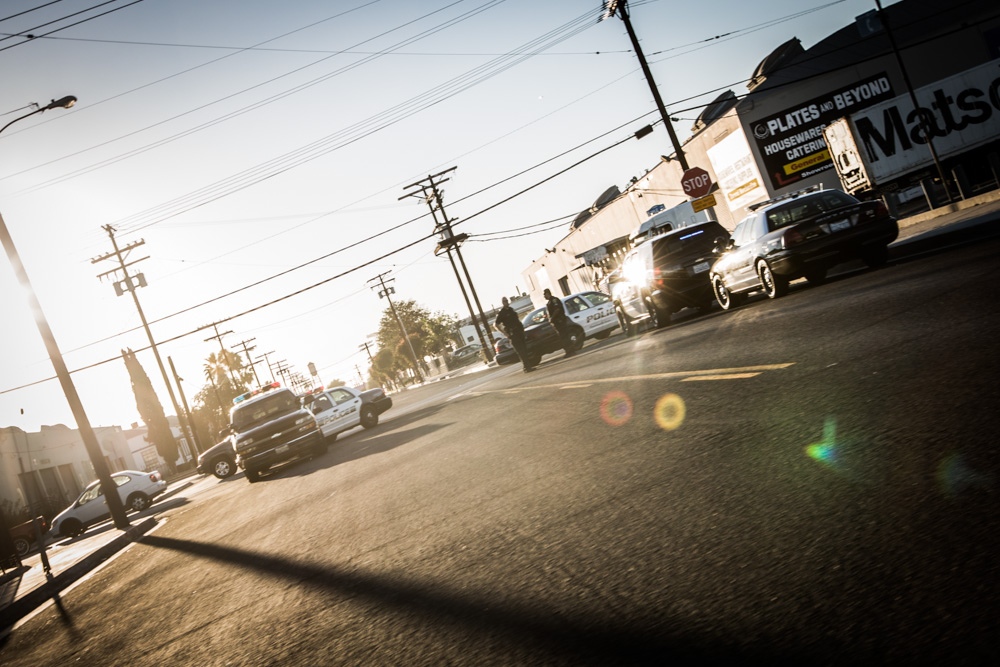