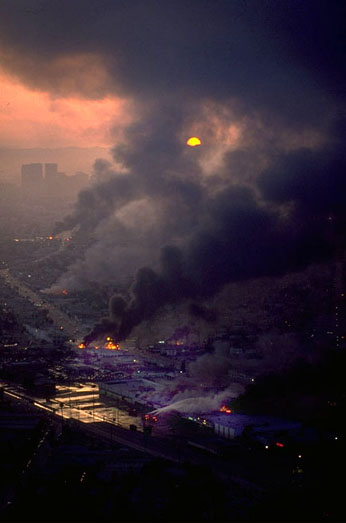 I’m not really sure what prompted me to write about the 1992 L.A. Riots tonight. Maybe it’s the unusually warm weather, or the recent acquittal of 3 New York cops who shot a Black groom 50 times just hours before his wedding, or merely the fact that I was racially profiled by an older white woman this afternoon (eh, it happens). But somehow I got caught up sifting through old Youtube vids of the Rodney King verdict aftereffects from over 15 years ago.

I still remember vividly what was going on throughout Southern California this entire week. I was in 7th grade at the time, and for the first time in my life, I was introduced to the harsh realities of racial divide, old friends of different skin colors suddenly leering at me from across the schoolyard. No one wanted to leave their homes for days, let alone go near any common areas. Since the internet was still materializing, our eyes were glued to the TV sets, and the news visuals were incredibly overwhelming. It seemed like ordinary human beings had lost all sensibilities, their grip on reality. The experts agreed that it was a result of racial strife bubbling over in the L.A. community combined with high unemployment and a Korean shopkeeper’s sentence for shooting a young Black girl, but as a child, it just looked like crazy people finding any excuse to get retarded. It really didn’t make sense, perhaps something that I’d understand when I got older.

Well it’s 2008 and after watching these clips, I still don’t really get it. In fact, I’m more confused than I was at 12 years old, especially outside of the context of the King trial, these scenes look dramatically cinematic, not like something that happened on the corner of Florence and Normandie just a few miles away.Could this ever happen again in LA? How far have our race relations really come since Rodney King?