The Nike Dunk SB has fallen from grace a bit. At one point in history—roughly between 2004 and 2008—the Dunk was the most important shoe out there. It birthed a whole new wave of sneaker fans and started a revolution. Before Nike rolled out its current skateboard program, the only places to buy “different” and exclusive sneakers were large metropolitan cities. And this was before the online shopping revolution, so to get the good stuff, you really had to travel to New York, LA, London, Paris, or Tokyo. Nike SB brought these type of shoes to smaller cities all around the globe. All of a sudden, you could just walk into your local skate shop and buy some Nikes you’ve never seen before. This opened up sneaker culture to a whole new group of people, and eventually led to the opening of sneaker stores in cities that would’ve never dreamt of housing an independent one. I will go as far as saying that the Nike Dunk SB is one of the top three most important sneakers ever, next to the Jordan 1 and Air Force 1.

But now it’s 2015 and the Janoski has taken over as Nike SBs number one selling shoe—to both skaters and non-skaters alike. The Dunk no longer draws huge crowds to stores and it’s quite rare to see a pair on the streets these days. Even Jeff Staple, creator of one of the most iconic Dunk SBs of all time, has admitted that he still loves Dunks, but no longer wears them. But I think that now, 30 years since the Dunk was first introduced as a basketball shoe, the Dunk SB is ready for a comeback. And why not? Nike is still releasing a lot of good colorways of the shoe that built SB. So I looked back at all the 2015 Nike SB Dunk releases and made a list of my 10 favorites from 2015.

To be honest, I’m not a big fan of Nike SB’s retros. By sticking original Low colorways on a Dunk High, it always feels kind of off. But De La Soul Dunks reapplying the colorways on a different height was a golden move. You see, ever since the original collaboration between the Long Island hip-hop trio and Nike SB dropped 10 years ago, I always thought the original low colorway was put on the wrong shoe. Since the colorway was so clean, the holographic 3 Feet High and Rising graphic should’ve had more space to be seen. Putting that colorway on a high top makes a lot more sense. What sucks is that Nike took the cheap route and replaced the holographic feature with a stale graphic. The low version of the High is an improvement as well. There’s a lot going on with that shoe, and somehow it feels more balanced this way. So kudos to Nike for this move, but that’s where I end the praise.

You see, for reasons unknown, Nike upped the prices to a ridiculous $150 for the high and $130 for the low, and produced a huge amount of pairs. The flop of the Cali Dunk High should’ve warned them. The lows released in May and there’s still a full-sized run (from size 5 up to 14, with only the 8.5 missing) on the European Nike Store website. Both pairs ended up in outlets and proved that Nike SB isn’t Jordan brand, which can successfully retro damn near anything. Nike SB should’ve skipped the huge media roll out, the Complex exclusive unveiling, the Bobby Worrest video (nah, wait, keep that one), and just released these as highly exclusive retros instead of overstocking on Nike.com. But it’s great news for De La Soul fans because buying a pair of De La Dunks was never this easy, or this cheap (although I did buy a pair of original De La Lows on sale for 50 euro at E-Zone in Utrecht back in 2005. Ah, the good old days.) 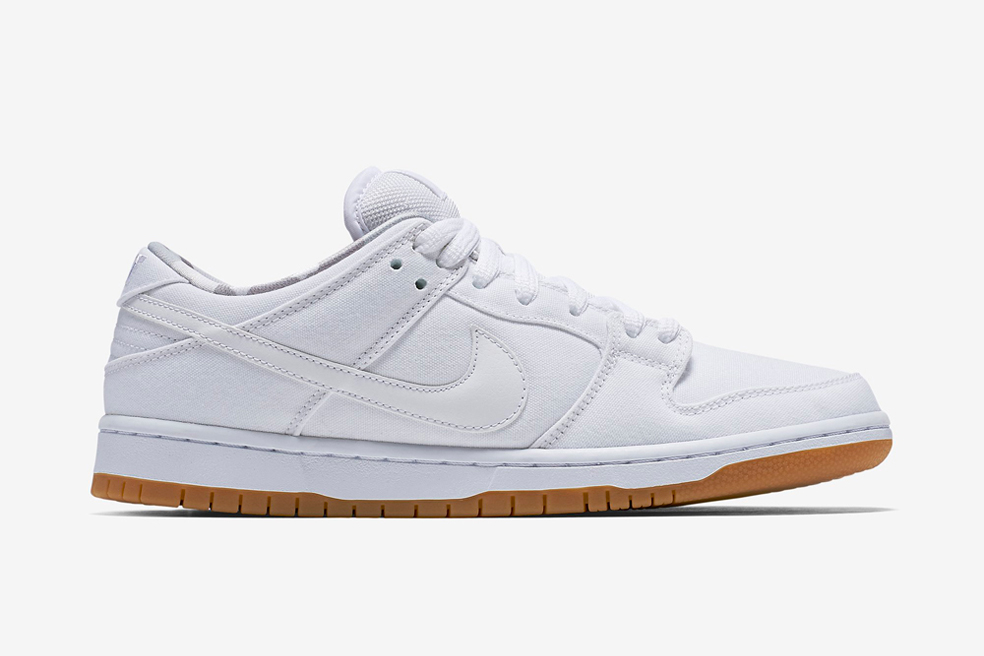 The Dunk SB City Series are the probably the most sought after SB Dunks ever. Out of the four, the Tokyo Dunk was the most basic. (Off) White canvas upper, gumsole, no branding besides the Swoosh—truly a thing of beauty. With only 202 pairs out there, it’s far from obtainable for most fans, so Nike decided to give them an alternative. Years ago, when nicknaming sneakers on the Internet was all the hype, someone would’ve probably named these the un-Tokyos or Poor Man’s Tokyos, but there’s nothing wrong with that. The suede and midsole are a lighter shade of white, and for some reason there’s an arctic camo pattern on the lining. But to many, this is as close as they’re going to get to a pair of Tokyo Dunks. And even if you don’t care about the Tokyos, it’s a white canvas sneaker with a gum sole. The very definition of clean summer footwear. 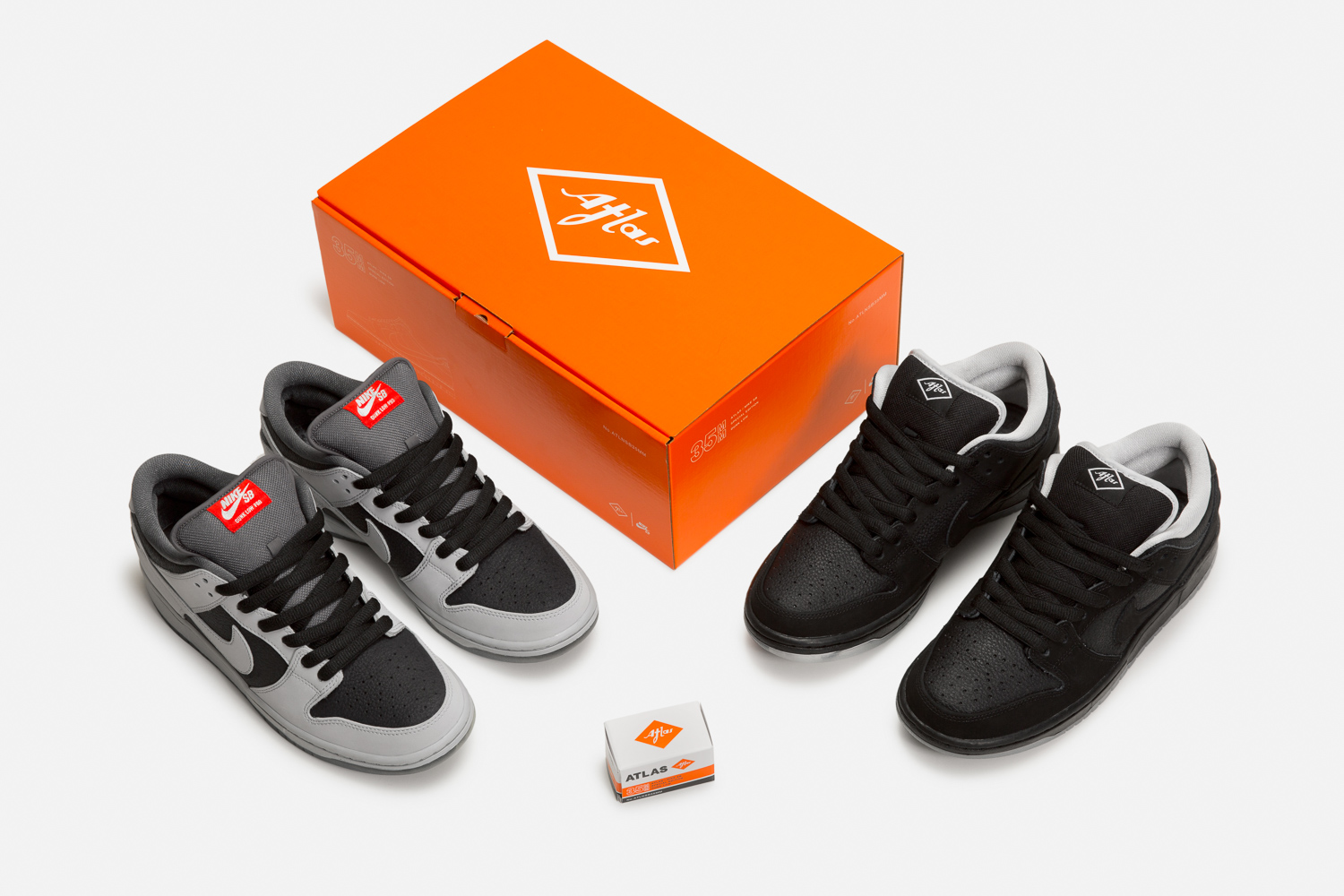 The collaboration between Nike SB and San Mateo, California, skate shop Atlas is one of the finest Nike SB has done in the last few years. The pack consisted of two SB Dunk Lows, inspired by two colorways of the iconic Leica M6 analogue camera. Nike and Atlas went HAM on the packaging for the in-store exclusive black version, which came in a special camera film-inspired box and included a magazine, sticker pack, certificate of authenticity, and bonus laces which were packed in a separate, smaller, film box. Underneath the icy soles of both pairs, you’ll find photos by Bay Area photo legends Mark Whitely (former Nike SB Global Brand Manager and SLAP Editor-in-Chief) and Joe Brook. The black/grey version saw a wider release as a “QS.” With a great concept, great colorways, and quality materials, this was a must have for any (old school) Nike SB fan. 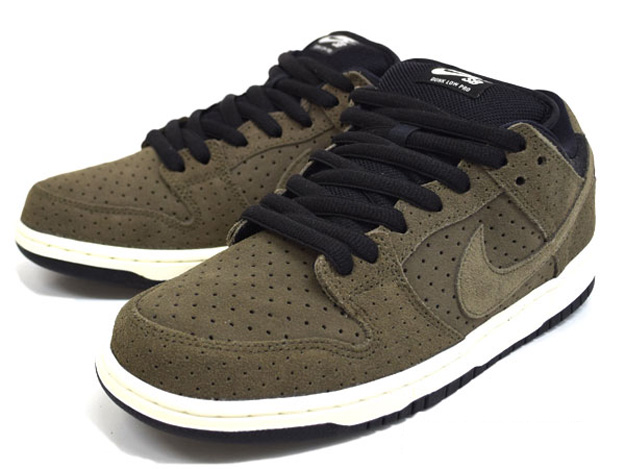 This Dunk is actually a bit of a mystery. The lack of info and images on the web point toward an Asia-only release, maybe even Japan only. The only question I have is, why? Why, Nike SB, did you not share this amazing Dunk with the rest of the world? The color combination is great: a dark olive upper with black lining, tongue, and laces. The upper is fully perforated suede, including the wing and toe box, which prevents it from earning a Gino-related nickname. No crazy concept, no collaboration, just a great “GR” colorway. If only it had GR distribution… 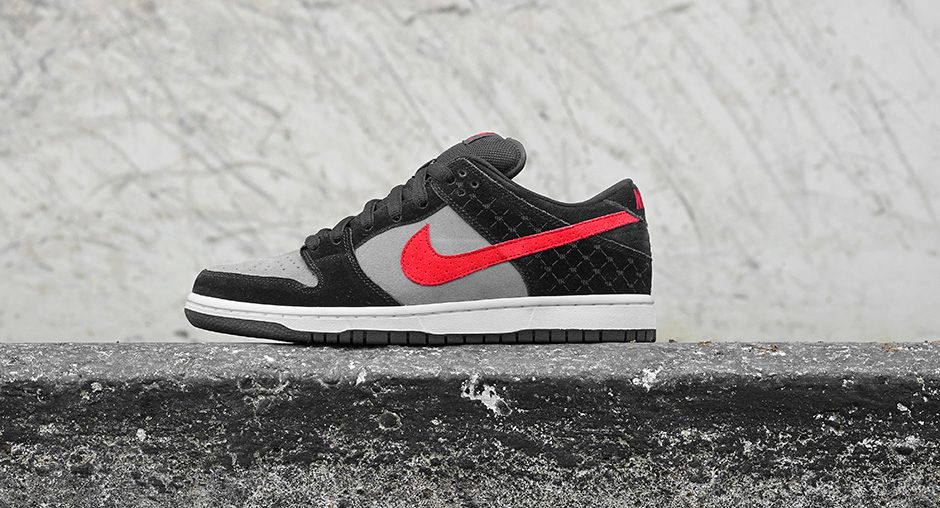 This year, Nike retroed the P-Rod 1. Paul Rodriguez’s first sneaker was released 10 years ago, and it does show its age. I still have a pair of Stash P-Rods at home that I never wear, simply because the shoe is just too damn puffy. The retro sold out of nostalgia, but the best tribute to the original P-Rod came through Primitive. The Encino, California-based store and skateboard brand is co-owned by Paul Rodriguez and has a couple of SB collabs to their name, but the 2015 P-Rod Dunk is by far their best work to date. They took one of the best colorways of the P-Rod 1 and applied it to the Dunk, including the Gucci-esque PR pattern embossed on the wing. The colorway still holds up, as good colorways tend to do, and this was another amazing, yet slept on, Dunk SB release in 2015.

Nike SB Dunk Low ‘Once In A Blue Moon’ 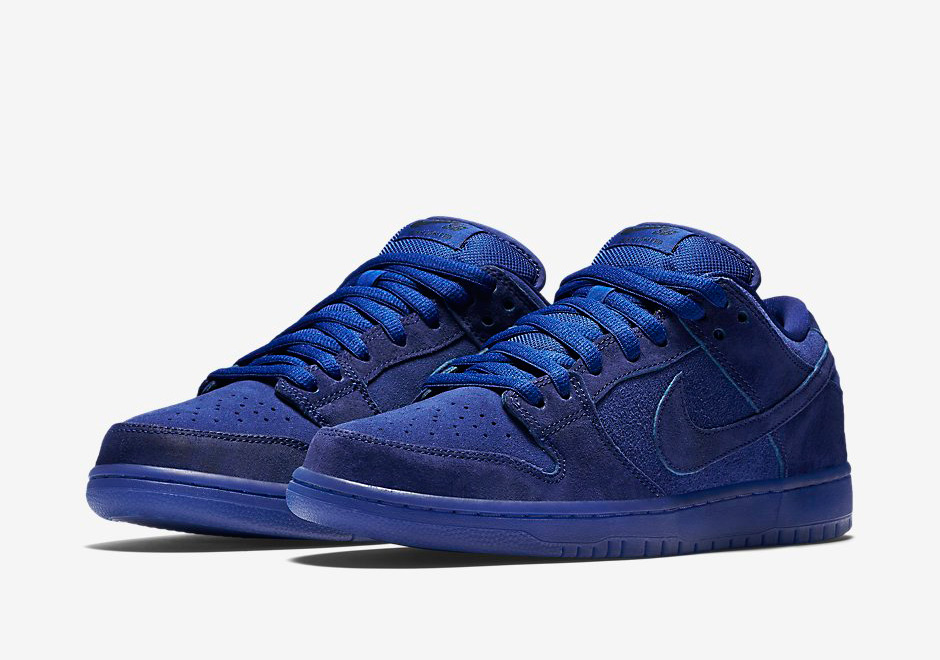 Before Nike launched its current skate program and introduced the Dunk SB, there were the Nike Pro B Dunks. They were fat-tongued Dunks with great materials and amazing colorways. The all blue ‘Smurf’ Dunk from 1999 remains a favorite amongst Dunk collectors until this day. Nike revisited this classic with their “Once In A Blue Moon” Dunk, which dropped in October. These blue shoes feature a suede upper and mesh tongue in dark royal blue with a matching mid sole and laces. The insole shows a crater-y moon surface, which ties into the moon theme. Having the blues never felt this good. 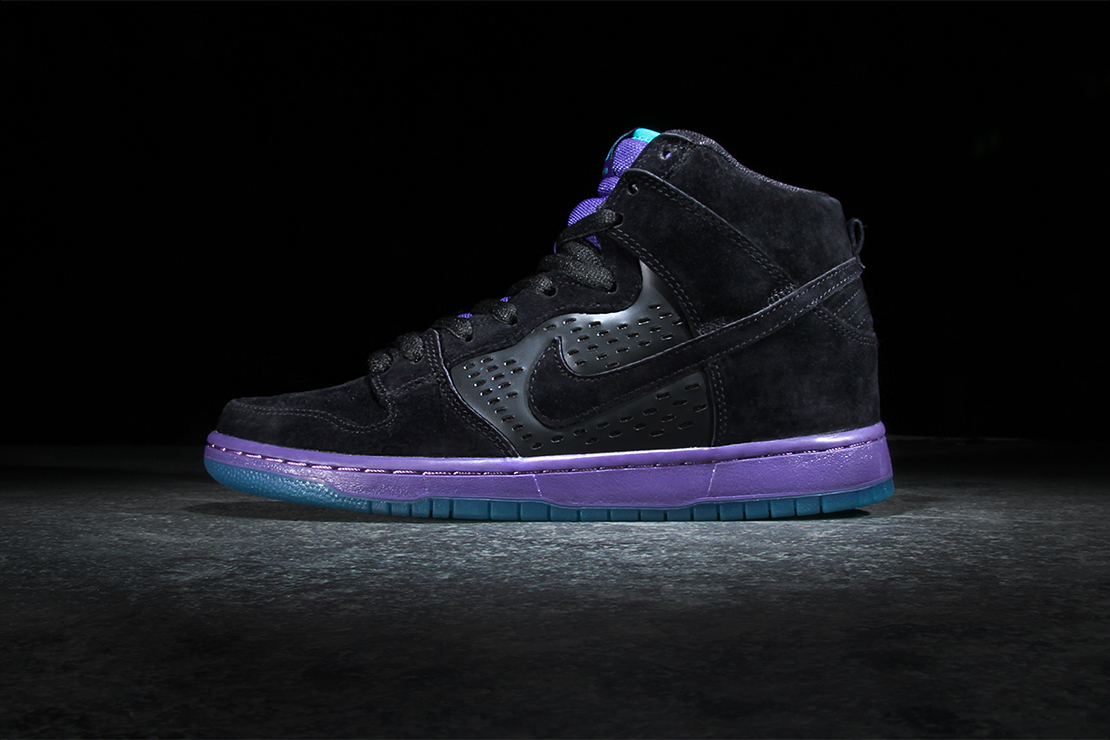 In a way, this is a follow up to the original Supreme Dunks: take a classic Jordan and apply it to a Dunk silhouette. But this works on more levels than just an homage to the Jordan V. This Dunk was a collaboration with Black Sheep, the skate shop from Charlotte, North Carolina, which gained some notoriety through their recalled Paid in Full Dunk High. Charlotte, home of the Hornets, the team owned by Michael Jordan, celebrated their 25th anniversary last season by switching back to their old name and colors, which happen to be the same as the ones used on the Jordan V (Black) Grape? Yeah, this is a collaboration that works on every level. The Jordan V-esque plastic netting on the side panel is the cherry on top, although, I feel like the execution would’ve been perfect if they added the signature lace locks to it. 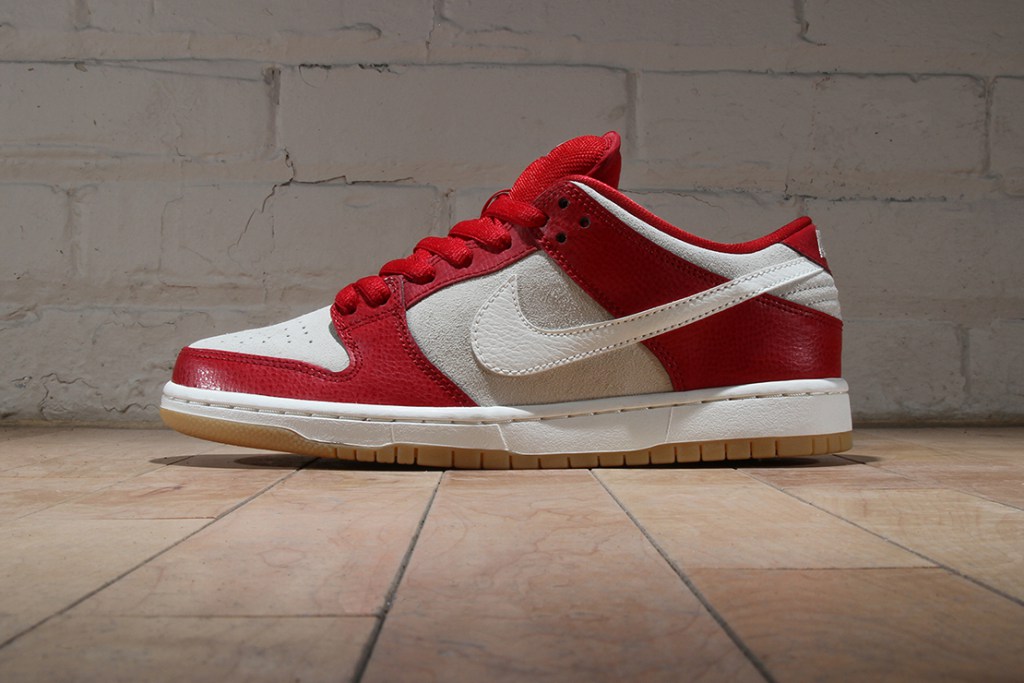 The 2014 Valentines Dunk was good, but overall, it had a bit much of a “St. Johns Low with a graphic” vibe to it. Nike took the colorway and improved it for 2015. Off-white suede, red tumbled leather, white leather Swoosh, gumsole—all the ingredients for a perfect sneaker. This one most definitely had SB fans dropping hints to their S/Os around February 14th. 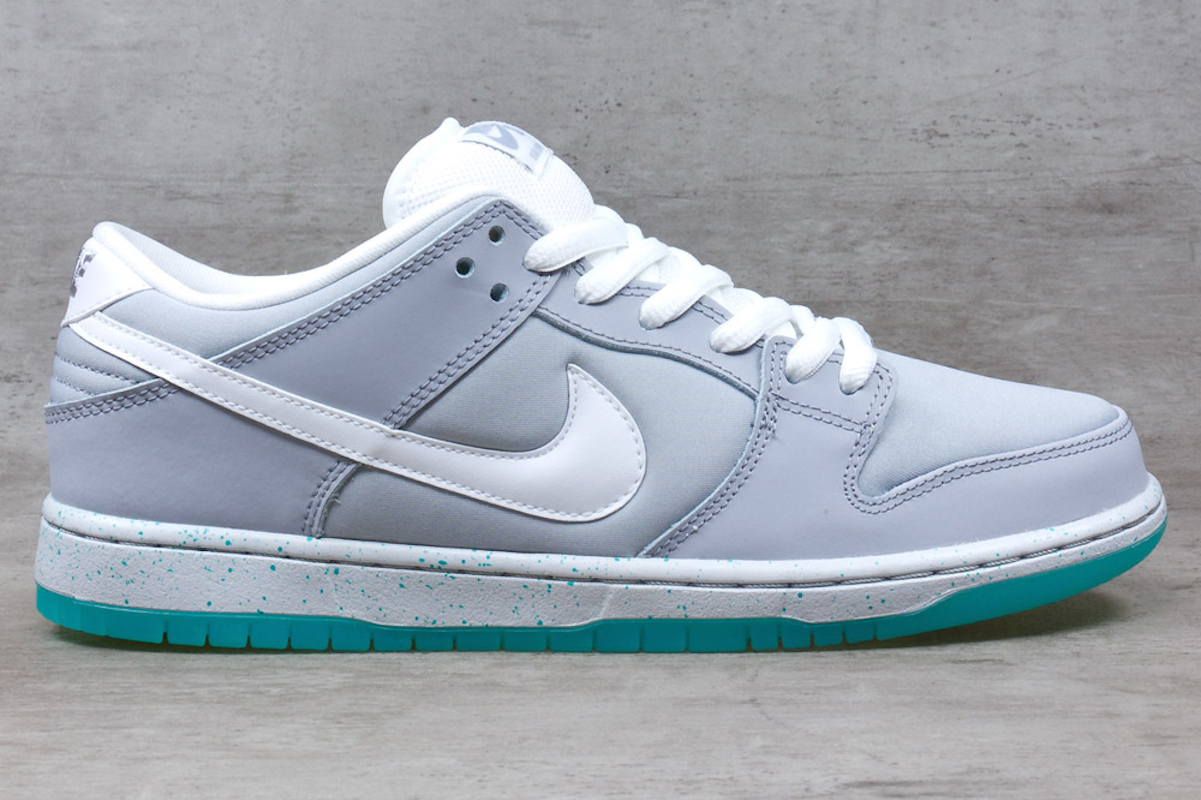 It seemed like the entire world was glued to their computer or phone screens on October 21st, all waiting for information about the Nike Mag. Ever since it appeared in Back To The Future II, the shoe has remained a holy grail for sneaker fans, ’80s babies, and movie and pop culture enthusiasts. Nike never released the Mag, except for 1500 pairs in 2011, which were all auctioned off to support the Michael J. Fox Foundation. Throughout the years, Nike has put the Mag colorway on a variety of sneakers, including the 2008 Nike SB Zoom Tre AD. In the spring of 2015, Nike SB put the silver and teal colorway on a Dunk SB Low, with a leather upper, translucent sole (which symbolizes the lights in the Mag sole), a speckled midsole, and Hover Board-inspired insoles. If Nike would’ve dropped these on October 21st, the hype would’ve been insane.

The 2015 SB Dunk year is about to end with a bang. Cincinnati-based skate shop Anonymous and sneaker store Unheardof have joined their creative forces to design a Dunk High and Low inspired by the 1990 World Series. 25 years ago, the underdog Cincinnati Reds played the Oakland A’s in the MLB Finals. The Athletics were favorites because of the Bash Brothers, the hard-hitting duo consisting of Jose Canseco and Mark McGwire. But the Reds had their own special group: the Nasty Boys, the Janet Jackson-inspired nickname for relief pitchers Norm Charlton, Rob Dibble, and Randy Myers. Thanks to the Nasty Boys, the Reds swept the A’s in four straight games to crown themselves the 1990 MLB champions.

Anonymous and Unheardof designed a Dunk for each of the two contenders. The A’s are honored with a green/yellow/white Dunk High, which kind of looks like the old ‘Buck’ Dunk SBs, representing the team’s colors. The Reds get a Dunk Low, also in the colors of their World Series uniforms. The golden Swoosh represents the World Series title, and on the back of the shoes, you’ll find “Nasty” and “Boys” to honor the trio that helped the Red clinch that title. Both shoes have a patch of the American flag, just like the jerseys during the World Series. In 1990, the US started the Gulf War, and since sports and patriotism are closely connected in the States, the jerseys of both World Series teams donned a patch of the Stars and Stripes. To complete the baseball backstory, the tongue tags are connected to the tongue with baseball stitching. The shoes are set to release on December 12th and are another highlight in Nike SBs story-telling history.