Artist/Designer Benjie Escobar on His L.A.-Inspired "Take It Easy" Show

LA-based artist/designer Benjie Escobar‘s love for lowriders, swap meet bootleg graphics, and Spam musubi all culminate tonight at his show “Take It Easy” in Verdugo Village’s Hutch LA. Whether it’s streetwear, anime, Old English typography, or hamburgers, thematically, Benjie’s diverse body of work has spanned almost all of his childhood interests. We got a chance to speak to him below about tonight’s show and learn a bit more about his uniquely LA, nostalgia-driven approach. 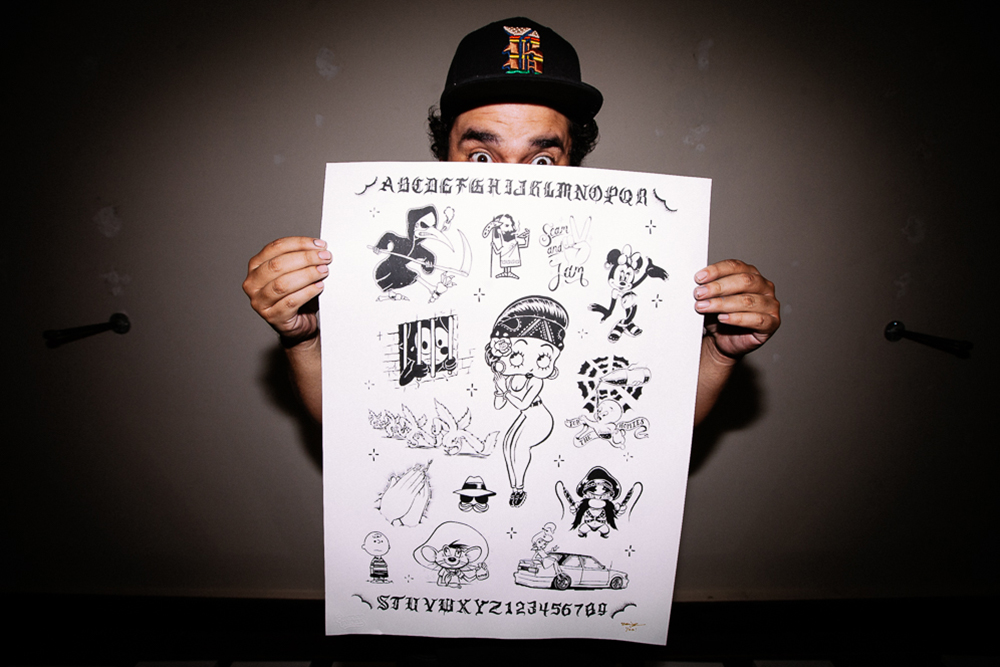 Benjie holding the flash tattoo sheet that Beautiful Truth will be using to tattoo attendees at the show tonight.

ALINA NGUYEN: Can you tell us more about how you got the work together for the show? You mentioned forcing yourself to do one drawing a day?
I’ve been doing graphics for so long, I felt like I had lost my voice as an artist. I could make stuff look pretty or in anyone’s style, but I had forgotten about the fun of just creating for myself, with no goal in mind. As an exercise, I decided to go back to a period when I really loved drawing and post something on Instagram once a day. Around the time I was 12-13. I’d just draw whatever came to mind with whatever I had lying around – no real references or computer, just me and some paper. At that specific moment of my life, I was heavily into building lowrider bikes and customizing anything I could get my hands on, so it’s a theme that spilled over these pieces years later.

As a creative, do you find it easier to stay productive/prolific by creating rules for yourself like that?
As much as I want to say creating structure helps, I’m not really sure if it does for me. Some of my best and worst ideas have came in the most exhausted moments of my life, so I’m not quite sure. I’ve noticed its worked for a lot of my friends, though! 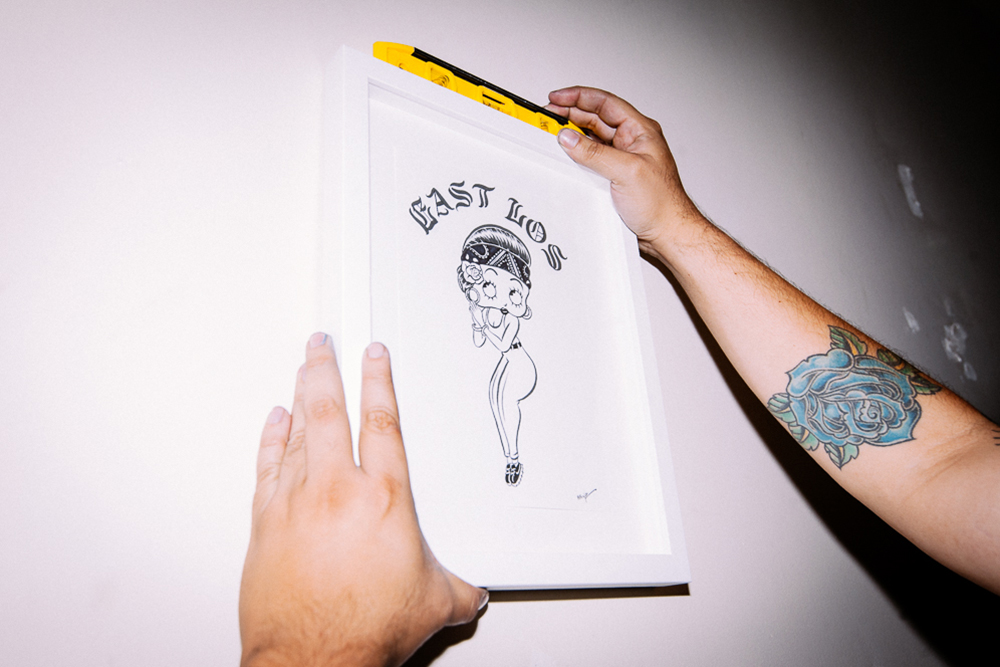 We noticed a lot of Latino lowrider motifs in your work. What’s your connection with that culture?
My dad would paint cars as a side thing, and I had a small group of friends I hung out with who were obsessed with lowrider culture. We would DIY any old Shwinn we could find and paint them in my backyard with my dads tools. It taught me a ton about doing things myself, and not being scared to get my hands dirty in creating.

There’s a uniquely LA swap meet bootleg aesthetic to your work, which I think overlaps with the design parodies prevalent in streetwear. Can you talk a bit about that in terms of your background working within [streetwear] and being inspired by both worlds?
I would hit swap meets early on in search of bike parts and whatever else I could find. There were always the really bad bootleg shirts being sold, and that aesthetic always stuck with me – it’s pretty prevalent in most of the shirts I’ve done. 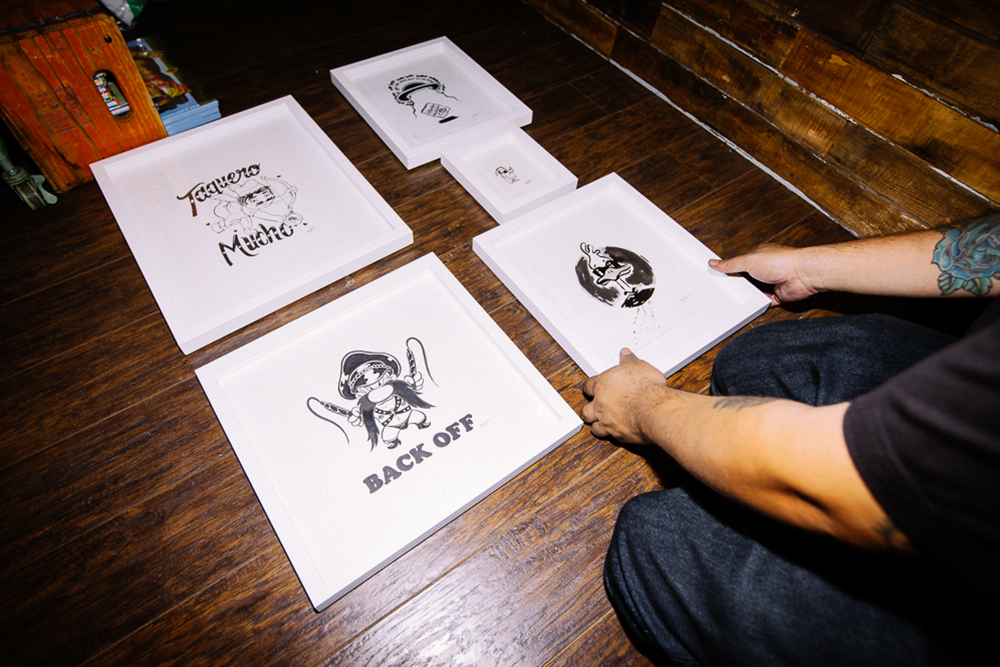 The show’s gonna be catered by East Los Musubi. Can you tell us more about East Los Musubi?
I started East Los Musubi with my partners Adam Martinez and Doreen Nakama around December of last year. All of us had been making our own variations of it and noticed a bit of a lack with musubis – and when they were available, it was very kitschy Hawaiian. Not that there’s anything wrong with that, but we really wanted something that spoke to us. I’ve done a ton of graphics and artwork relating to food and had worked with some major restaurants, Adam had a ton of cooking/restaurant experience, and Doreen is a master Jedi of everything, so it made sense. Currently we’re doing pop-ups at friends’ venues and events, but the gears are in motion to expand.

Beautiful Truth Ink will be doing flash tattoos. What’s your connection with them? Tell us more about the flash tattoo sheet.
Alain (Beautiful Truth Ink) has been working with Hutch LA (the store) for a very long time, and I jumped on the chance to have him tattoo during the show. While posting some of the art, a lot of comments were about getting it tattooed, so let’s see who actually puts their money where their Instagram mouth is [winks]. 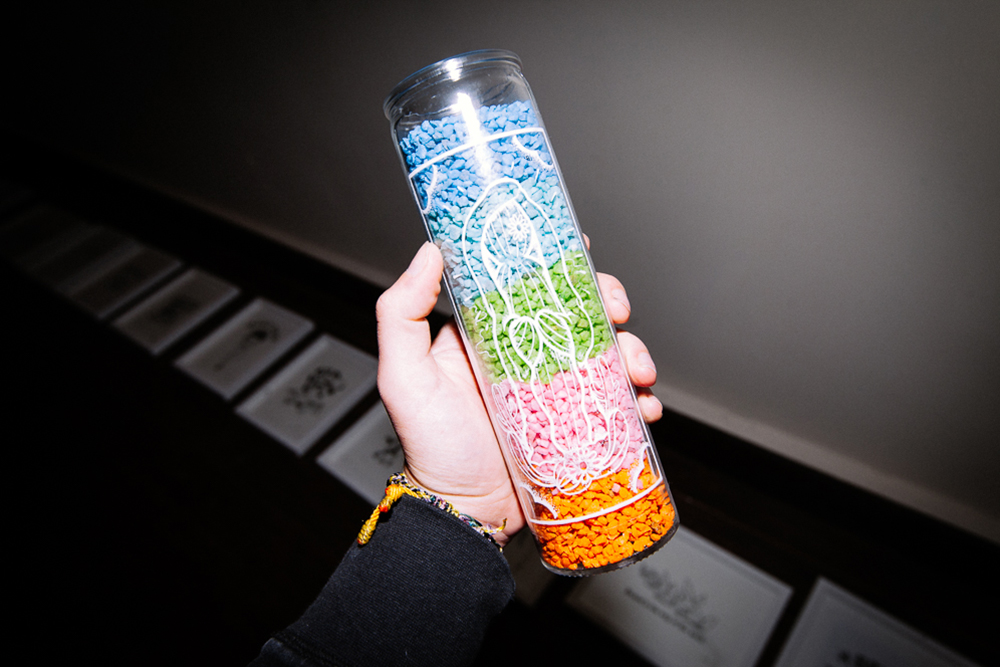 You said this show’s a “narcissistic take on nostalgia.” Is nostalgia important to your work?
Nostalgia is a huge part of my art. All the weird little things that have happened so far on my ride of life have turned me into the loony person I am now.

What is your process like in terms of typography/lettering?
I’ve been doing letters forever, so at this point it’s kind of second nature. With this particular set I made my own variation of Old English/black letters. The same period of life [when I was] 12-13, I was obsessed with Old English, but had no idea it was made with calligraphy pens. I would just make random shapes in the general style of it that you see in this set. It’s not quite right, but its also not quite wrong – middle ground, just where I want ’em. 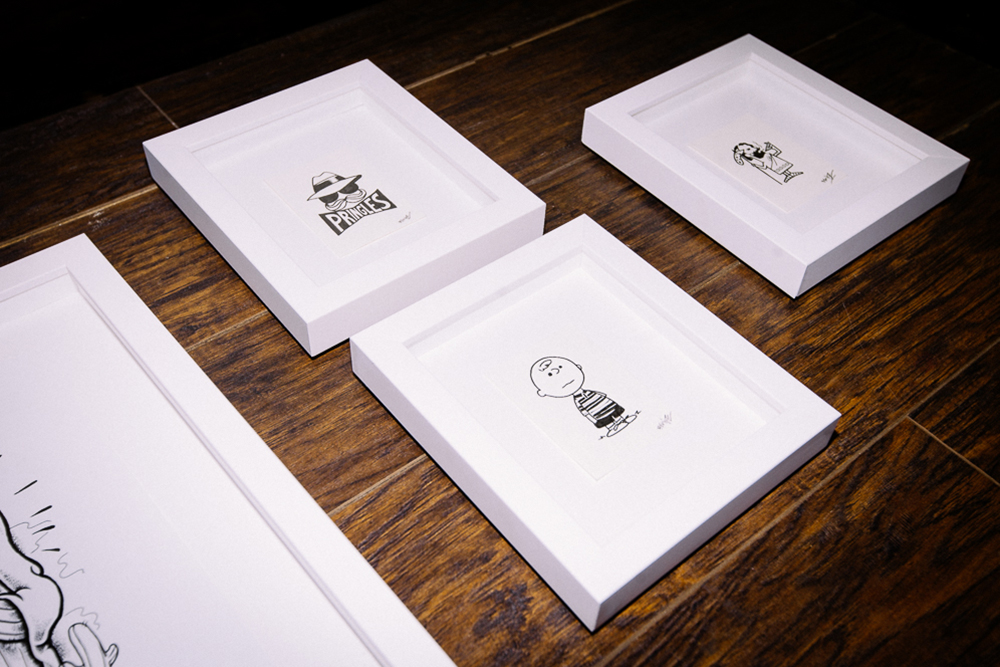 BEHIND THE SHIRT :: CREATIVITY