Behind the Shirt :: An Ode to Three Frogs Memorialized in Advertising History

In keeping with our longstanding tradition of having T-shirts with deeper back stories, we present to you the “The... Hund... reds” graphic, available now as a part of our Fall 2017 collection.

You may recognize these warty frogs from the ‘90s—specifically January 29th, 1995. It was a relatively mild winter’s day (we’re going to assume) because this scene takes place in Miami, Florida, where the (then) San Diego Chargers and the San Francisco 49ers faced off in Super Bowl XXIX. The San Francisco 49ers were favored to win by a lot, which made the final score of 26-49 (49ers up) unsurprising and the game relatively boring, if we’re being honest.

But we all know that the Super Bowl isn’t about football anymore, or even about American culture, or weird snacks in oblong shapes with queso dip. No, the Super Bowl is about capitalism, advertising, and those 30 seconds of airtime that we all talk about in the office the following day and probably forget about a week later.

Cue Budweiser’s 1995 Super Bowl commercial. It’s a strange one—featuring three frogs hanging out in the bayou, croaking nonsense to each other until we realize that with proper timing, their croaks sound out the word “Budweiser.” As the camera pans up, we see a glowing Budweiser sign in the middle of this swamp. And that’s it. That’s the commercial. No seriously, watch it.

The weird part is that the commercial was cited as one of the best to emerge from the Super Bowl in advertising history (we credit this to the ‘90s being a simpler time) and was even featured at the Cannes Film Festival. Gore Verbinski, who went on to direct The Ring and the first three Pirates of the Caribbean movies, directed the iconic 30 seconds that was sandwiched between the lackluster battle against the 49ers and the Chargers. There was even controversy that emerged regarding the cartoon-like commercial, when a study released by a Berkeley research group found that children could identify the animated frogs better than they could Smokey the Bear, thus accusing the beer behemoth of targeting children with their marketing tactics. 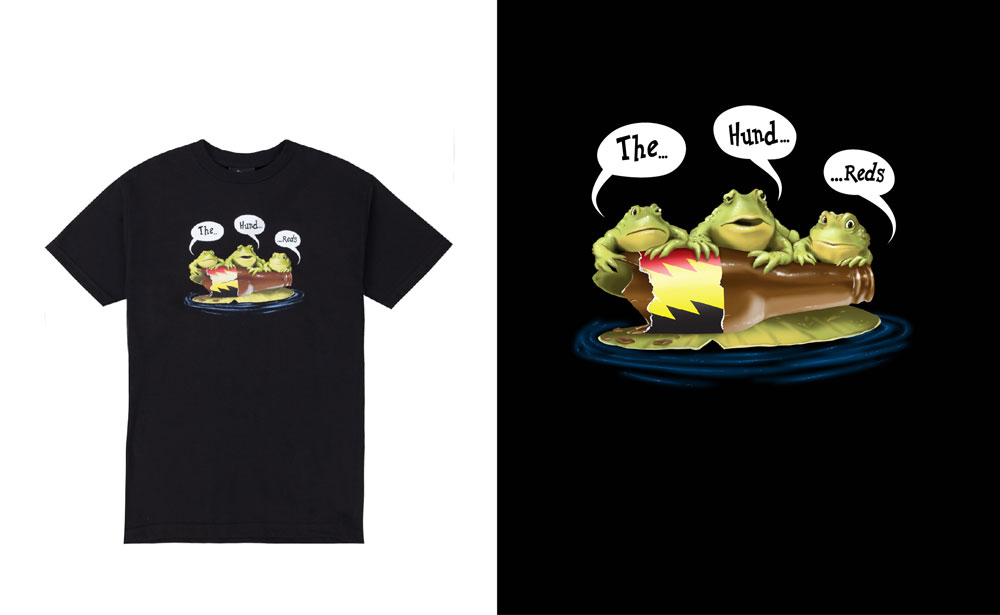 Whatever the true intentions were, we decided to pay homage to that strange period of time—and the frogs that came with it—the way we know best: through product. We took the frogs and flipped them to croak out our own name, “The... Hund... reds,” while carefully perched on a bottle of Wildfire booze.