Christopher Burch is a San Francisco-based artist who specializes in oil based painting, using his own views and techniques to reinvent surreal contexts within folklore and mythology. His handle on Instagram gives a nod to his appreciation of Francisco de Goya, and like Goya himself, Chris is known for his ability to engross himself with perceptions and concerns that most of society hides from not only their art, but from themselves. Burch is constantly trying to reinvent his world views through his own slant of thoughts and emotions, and his art speaks for itself. I recently visited White Walls Gallery while Christopher spent the week in the gallery to prepare his latest installment, “Oh ye of Little Faith.” 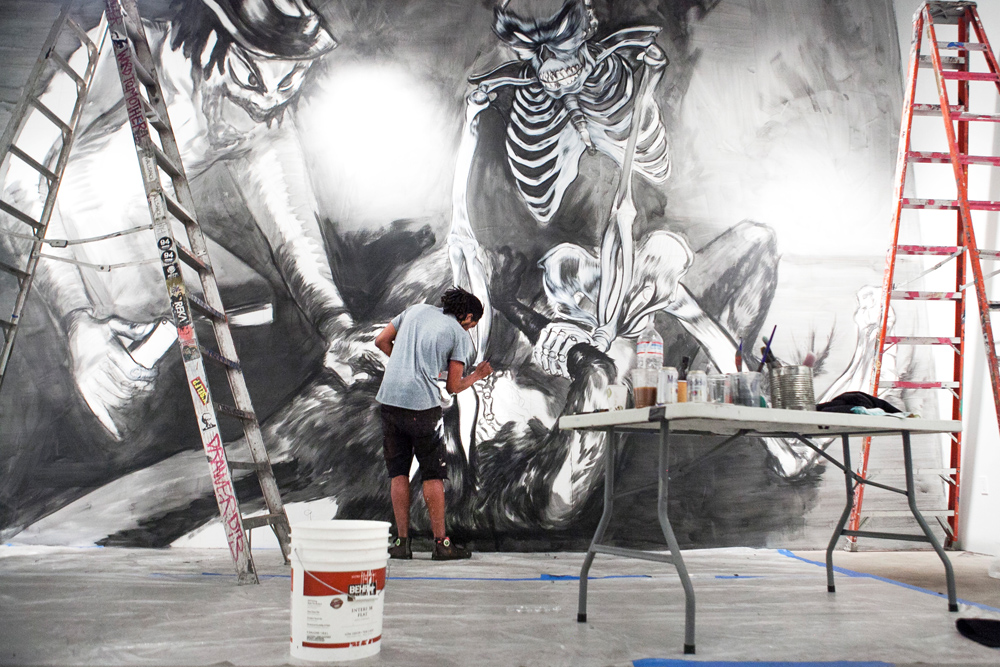 JOSH SCHIELIE: Can you introduce yourself?
CHRISTOPHER BURCH: My name is Christopher Burch. I am originally from St Louis, Missouri. I came to San Francisco in 2006 because I received a full scholarship to the MFA program at SFAI. I reinvent folklore; I work a lot with mythology and ideas of archetypes, which I use to create new stories that fit my worldview. Right now, I’m working with the Br’er Rabbit mythology. I feel that the Br’er Rabbit mythologies (stories that have their origins in West Africa) have been grossly misshapen and sterilized by American popular culture. In this ongoing narrative, I am not only reclaiming these stories but also making new ones, infusing/remixing them with ideas from writers such as Henry Dumas, D. Scott Miller, Amiri Baraka, Ralph Ellingson, Avery Gordon, James Baldwin, Dostoyevsky… etc.  Musicians such as Nina Simone, Charles Mingus (read his autobiography Beneath the Underdog) Little Walter, Skip James, Sun Ra, etc., are major inspirations to me and influence my ideas heavily. I’m recreating but also inventing new stories within a greater context that encompasses blues, inheritance, mysticism, and folklore. I put a surreal twist to create a more subversive context for these stories. These stories existed and have taken on a more seditious undertone, and the purpose behind my work is to bring that back into these stories. 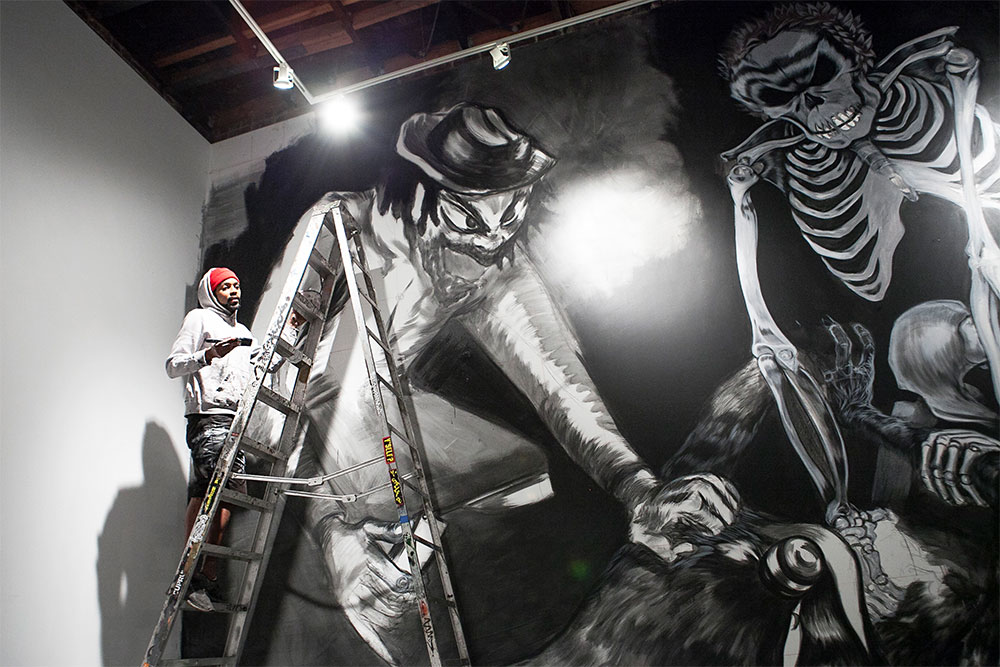 Can you tell us about your current installment at White Walls Gallery, “Oh ye of Little Faith”?
This is the third installment of my evolving graphic narrative, “The Missed Adventures of Br’er Rabbit” and “Br’er Death in the Land of Shadows.” In this project, the trickster archetype is championed as an embodiment of ambiguity and ambivalence, calling into question fundamental assumptions about the way the world is organized and, at times, offering new ways of transforming it. In looking back at the previous exhibitions I felt that Br’er Rabbit was becoming sort of a hero in the narrative. I like the idea of the Rabbit being a sort folk hero, but it isn’t true to the nature of these stories. You see, in many mythological pantheons around the world, the Rabbit or Hare is an amoral being. Neither right nor wrong, the Hare simply exists with all the complexities and contradictions that humans have. So with this exhibition, I wanted to focus on Br’er Rabbit’s amoral nature – neither hero nor villain. Around the world, the trickster archetype – and the rabbit is very much a trickster – functions as a catalyst for some sort of normative shift or lesson to be learned. Sometimes this lesson happens to fall in the favor of the trickster other times it is the trickster’s hubris that brings about its own demise. In this exhibition, I really concentrated on creating a story that moved the rabbit out of the hero’s spotlight in order to focus on its truer liminal nature. 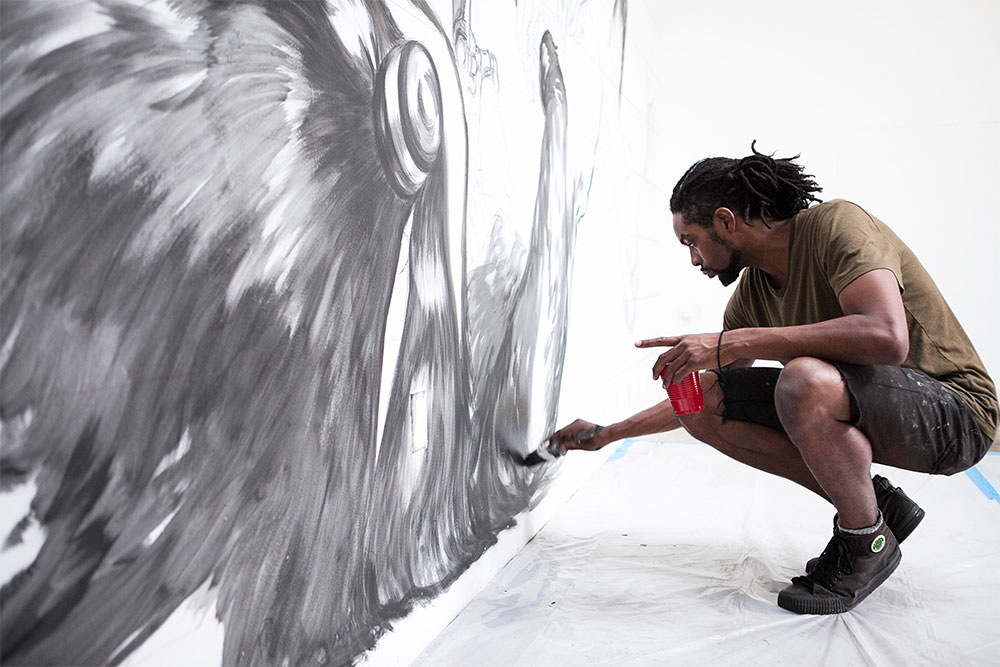 Originally from St. Louis, can you describe the art scene in Missouri compared to the scene here in San Francisco?
It’s not so much of a comparison. I think the art scene back home is more independent-driven. You have to create your own galleries, and traditionally, the old money status quo is really in trend. There’s a stigma that gets attached to a lot of local St. Louis artists. That stigma divides the work into value. Artists living and working in St. Louis are not considered as important or valuable as artists living and working outside of St. Louis. So that creates a situation where you have a bunch of really talented people that don’t get the recognition they deserve. The institutions and galleries that are kind of blue chip don’t value the work being produced in their own backyard… Coming from St. Louis was great for me because it taught me how to create on my own and apply really practical ideas to my art practice – I think it’s a great training ground for artists. 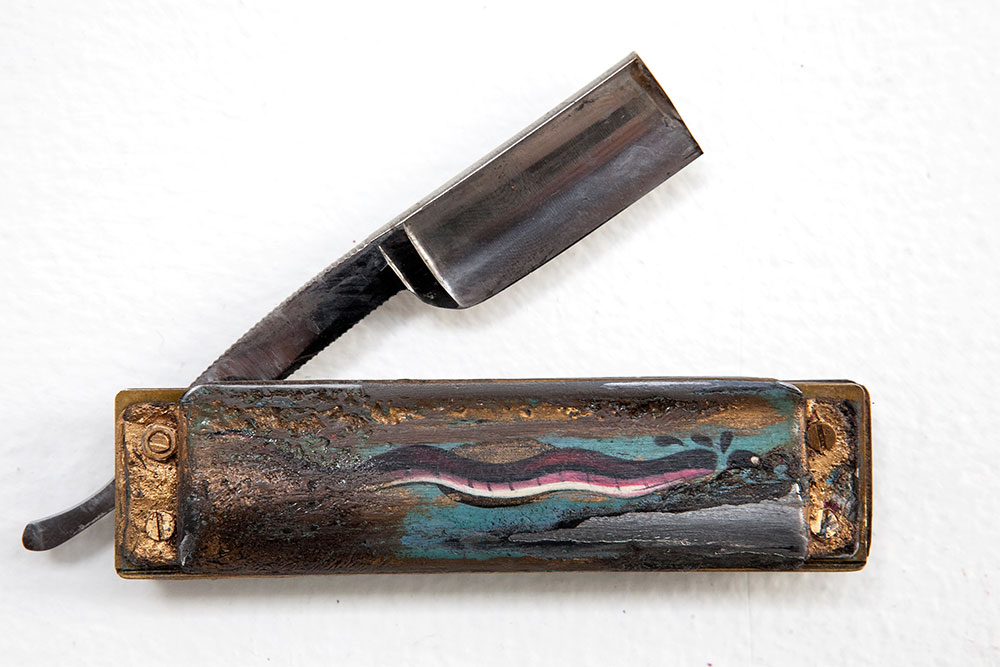 Why is San Francisco a thriving destination for artists?
San Francisco made me a more ambitious person, the people that I met when I first came to San Francisco gave me a hunger that has stuck with me. The openness of this city really does thrive with creative passion, as an artist you feel like you can do anything here. There is a lot of support and understanding in this city. I think people say yes here before they say no and I really like that attitude. People here are actually willing to take chances. There are a lot of risk takers out here, and it definitely feeds creativity.

Do you have a precise idea of the murals when you begin work, or does the image develop throughout the working process?
One of the reasons I really love to draw is because it allows me to explore ideas freely without worrying about a finished product. I always have an idea in mind, but I’m able to allow that idea to shift and morph into its own throughout the process. I come up with around 15 drawings of a fox before I get to the drawing that feels like it’s the one I was looking for but didn’t really know it. This is the original sketch of the mural I’m doing here now, but as I paint it I allow it to kind of be its own piece. 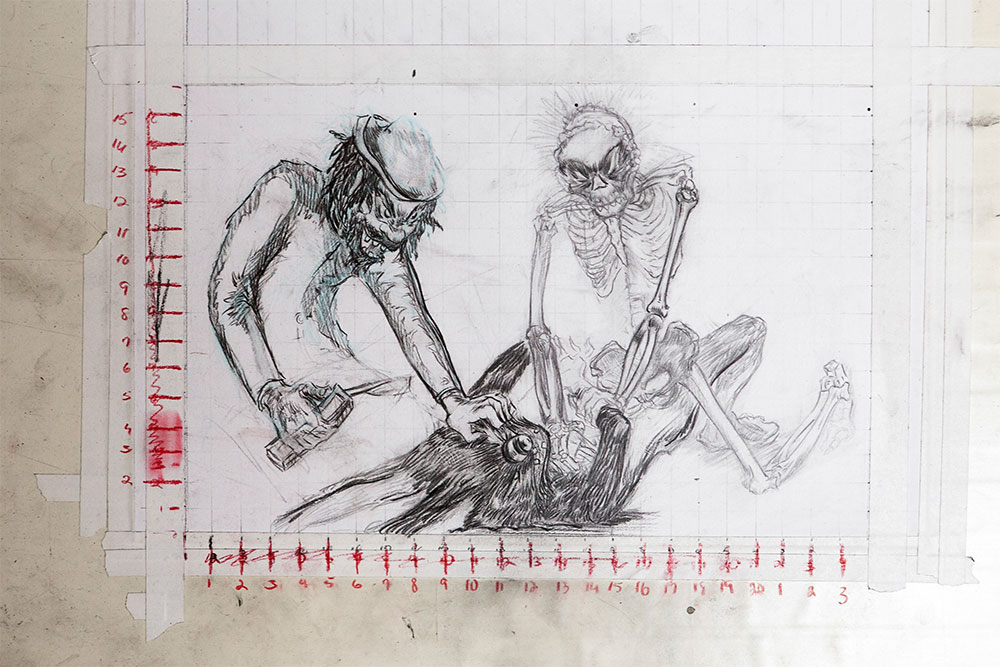 Looking at your work there’s not much color besides on a few of the tray pieces. Is there a particular reason why color doesn’t play a big role in your works?
I’m not really interested with color within my own personal work. I never have been and I’ve always stayed true to my own views. I really love to draw, so I’m really into the directness of the materials that I use. If I can make a line direct as possible without having to switch around materials and colors then that’s what I do. I’ve never considered myself a colorist; color has never been one of the things that my work is about. Some artists really appreciate the work being about conversation between colors, I just want to create really big bold graphic images. 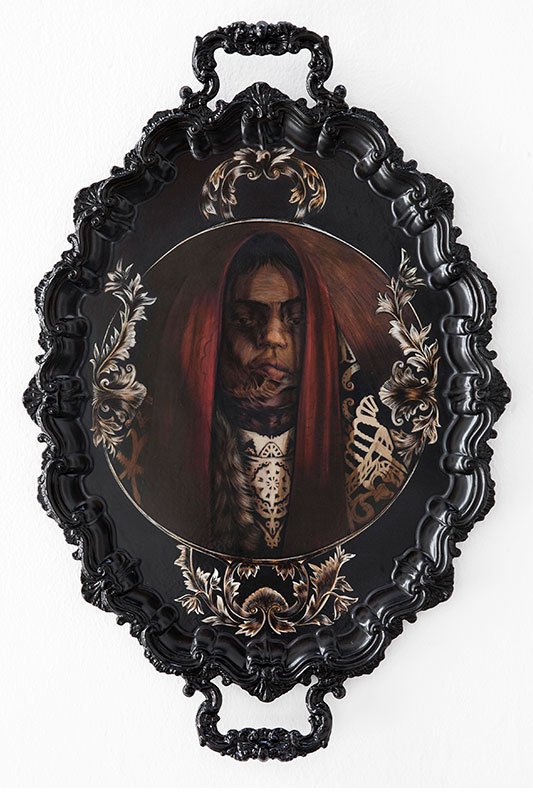 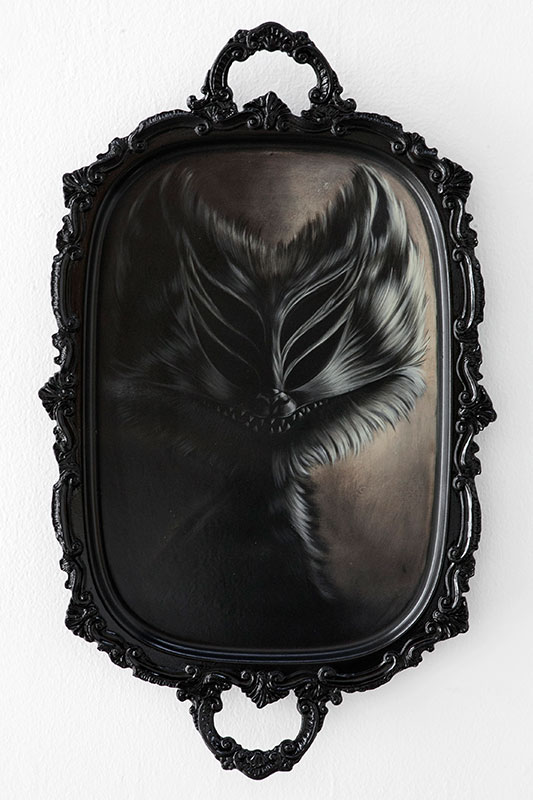 Can you talk about your obsession of working with different fabrics and patterns?
The fabric is about the pattern, I believe there’s a visual language in the pattern and it can talk to different experiences and realities. It’s really a conversation that is about an inherently embedded visual language due to the pattern. For example, if you have a really decadent Rococo pattern, then you think of wealth and influence. These are our natural associations that these shapes and patterns contain. The silver trays that I use are kind of like metaphors – on one end, they carry connotations of servitude, wealth, inheritance and then on the other end the images I create on them resist that idea. By painting the trays black, I can take away the more dominant physical characteristics of the tray, creating a sort of void or portal. I then paint or place my ideas into that “portal.” The image and the tray then become one, a painting, an image, an idea, while still carrying our associations of what a tray is and the functionality of such object. The completed piece reads as a window into the underbelly of the tray. 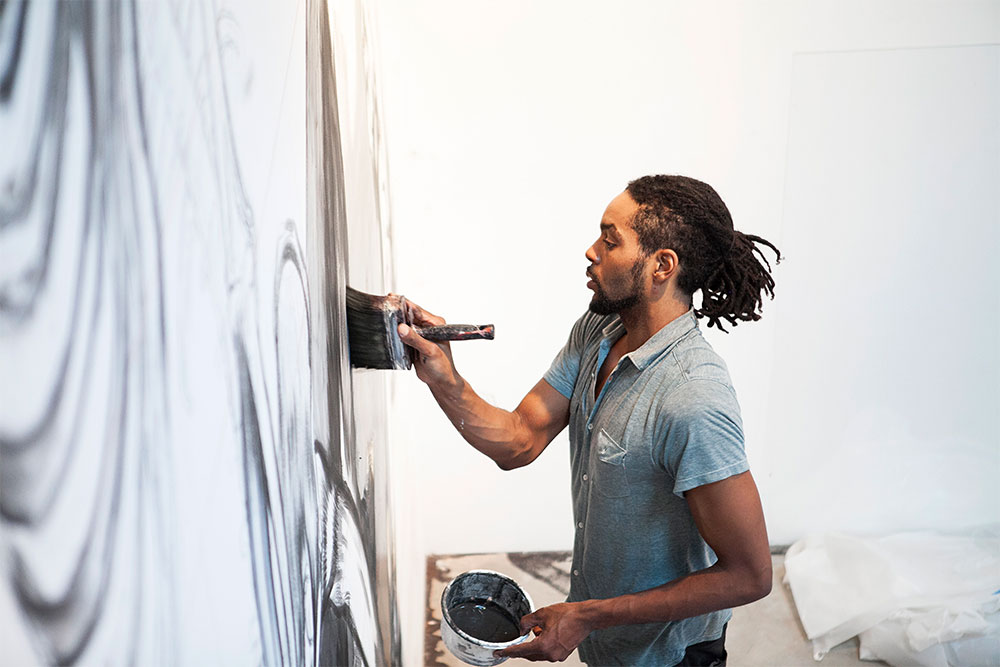 How do you value a piece of art?
I’m pretty open in terms of what I look at and what I digest. A lot of different things resonate with me, I would say what’s important is the idea and how it’s communicated. For example, we could be viewing a line drawing, but if that line drawing communicates a very specific idea and that idea comes off to me, then I feel like that is a very effective piece of work. I really think how emotions are conveyed within your work connect to me. There are so many different ways to convey human emotions, anyone that is able to master that and apply it to their work is amazing. That’s one of the reasons I really appreciate Goya, because of his ability to convey these ideas in his own head. He can draw a figure that has an immediate impact conveying traits like insanity and madness.

Why is art important?
Art gives meaning, as an artist I’m able to convey ideas and it will resonate with people – to create an image/idea is a very powerful thing. I think people downplay how we, as humans, perceive images and the importance they play in the formation of self.  Art has the power to build or destroy an individual’s sense of who they are – and for that reason alone it is important.