And I’m not just talking about within the music industry, but here at The Hundreds. It’s cool, I guess. Someone famous rocking a hoody in a music video or whatever, but we always take it in stride. I mean, next week, most of ’em will move on to something else anyways.

But Bun B is family. Always supportive, usually one of the first to congratulate us on successes, and always a text-message away. The best part is he actually knows what’s up with the independent brands (instead of relying on a stylist). If any celebrity has his/her finger on the pulse of streetwear, it’s Bun.

[For instance, today he was rocking one of Mikol’s new tees from Amongst Friends.] 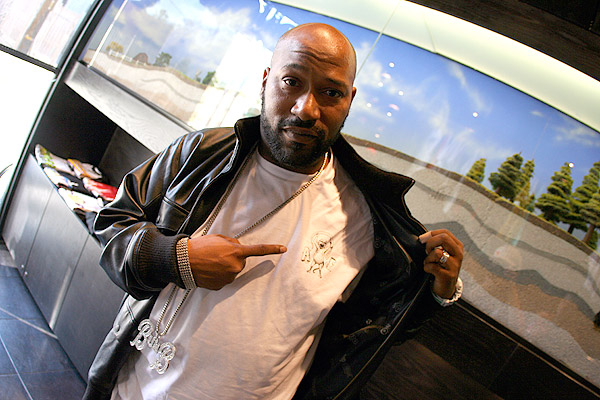 Speaking of coming and going, we had a pretty interesting discussion about where the music industry’s headed. I’m not sure if you guys are really getting what’s going on lately, but everything you’ve ever known about how to listen to / purchase / access music is about to change changing. Kinda like the way you look at your parents’ vinyl records, or your older brother’s cassettes, that’s how you’re gonna view CDs in.. NOW.

With everything moving to digital, and the subsequent collapse of the music industry, Bun told us that the only way it’s gonna get better is for it to all crash and burn first. But we both agreed that in a way, that’s a good thing. He remarked that it’s gonna force artists to come correct and be “real.” For the past decade, corporate formulas and marketing-driven album sales have degraded popular music to a mere shell of decency, so now, complacent one-hit-wonders who put out a wack record and reap rewards will be a thing of the past.

The artists will be forced to rely on tours and creative ways of merchandising to generate income and fanbase, which will allow the fans to filter out the good from the bad for themselves. And for the artists who complain about that, I’d refer them to an Ian Mackaye interview on VBS where the veteran punk questioned why musicians have always viewed tours as a means of promoting an album and merchandise, when in reality, shouldn’t it be the other way around? After all, isn’t the point of it all to get out there and play music?