There was a creeping sense of freedom that @Large by Ai Weiwei exuded on Alcatraz. The air felt different, and the seemingly colored irony was challenging, given the ambience. An artistic masterpiece contained on a secluded island that belittled freedom, @Large is an exhibit that continues to influence Ai Weiwei as a brand of liberal thinking and individualism. It is also an exhibit that Ai will never see in person. Ai Weiwei’s infamy and detainment in China did not change how I felt about him as an artist/activist. I was more interested in why he was considered the “Beijing Andy Warhol,” and something of a god. It interested me that he changed the whole energy of a dark room by meticulously placing porcelain bouquets of flowers in aging sinks and toilet bowls. One of many installations that was timelessly beautiful. 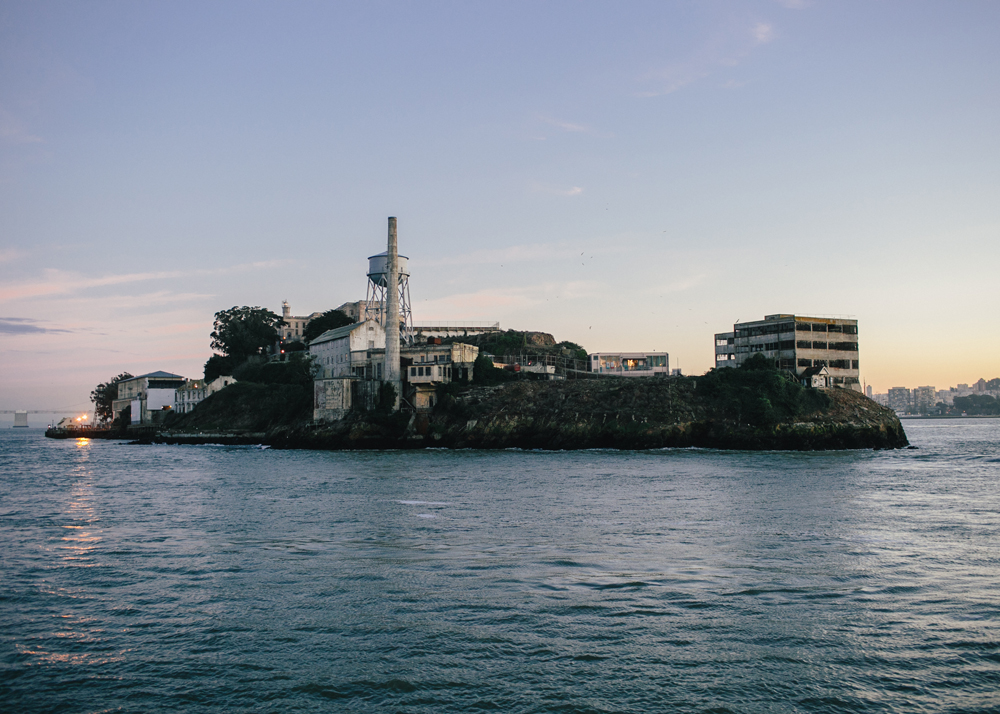 But along with the importance of Ai Weiwei’s work, so are the people that helped him create the works, too. Ai has a history of relationships with partners and volunteers that help his large-scale exhibitions come to fruition. For a piece like “Trace” – which required 1.2 million LEGO bricks to create portraits of individuals who were imprisoned because of their beliefs – nearly a hundred volunteers sacrificed almost 2 thousand hours to piece together the portraits. Weiwei apparently would walk over each one, and quickly decide whether the portrait was in the way that he desired. Boats were filled with components of Weiwei’s installations. The Dragon head alone for “With Wind” was contained within its own box. “Refraction,” a massive piece that essentially resembles a bird’s wing, was built in a fabrication studio in Beijing – and somehow shipped in its 5 ton glory to the States. San Francisco’s FOR-SITE Foundation co-curated and aided in the building of these grandiose pieces – and I had a chance to speak to Jackie von Treskow, the Program Director for FOR-SITE, and Tyler Reed, their Content Manager, about their vital roles in the making of @Large – and the scope of the work involved in creating the finished pieces.

STILLA: Throughout the process, what exactly was your role for @Large?
Jackie von Treskow: I am the Program Director for the FOR-SITE Foundation, but my role in the making of @Large: Ai Weiwei on Alcatraz can best be described as project manager. I worked very closely with Cheryl Haines – the curator of @Large – the artist’s studio, and our partners at the Golden Gate National Parks Conservancy and National Parks Service to facilitate all aspects of installing the exhibition. I was a liaison with the artist and his studio, facilitating and providing him with the research and materials necessary to understand the natural, historical, cultural, and architectural intricacies of the island and conceive the artworks, worked closely with our partners at the GGNPC and NPS to prepare the exhibition sites and go through the many stages of compliance review, coordinated project contractors, volunteers, and studio assistants to prepare, transport, and install the artworks, managed the installation timeline and budget, and so on.

Tyler Reed: As the Content Manager for @Large, there are several components to my role. As the exhibition was being developed, I handled a lot of the primary research on some of the subject matter addressed in the show. Specifically, developing foundational material on the prisoners of conscience featured in “Trace,” the official national birds of countries with particularly egregious human rights records, and the artists, writers, and thinkers featured in “Stay Tuned.” I also handled the licensing of sound recordings for “Stay Tuned” and “Illumination” and supervised our “Trace” Lego portrait assembly volunteer effort. Once the exhibition opened, I transitioned to managing our social media campaign as well as the “Yours Truly” postcard mailing effort. I also monitor the status of the “Trace” prisoners of conscience to keep our interpretive materials as current as possible. 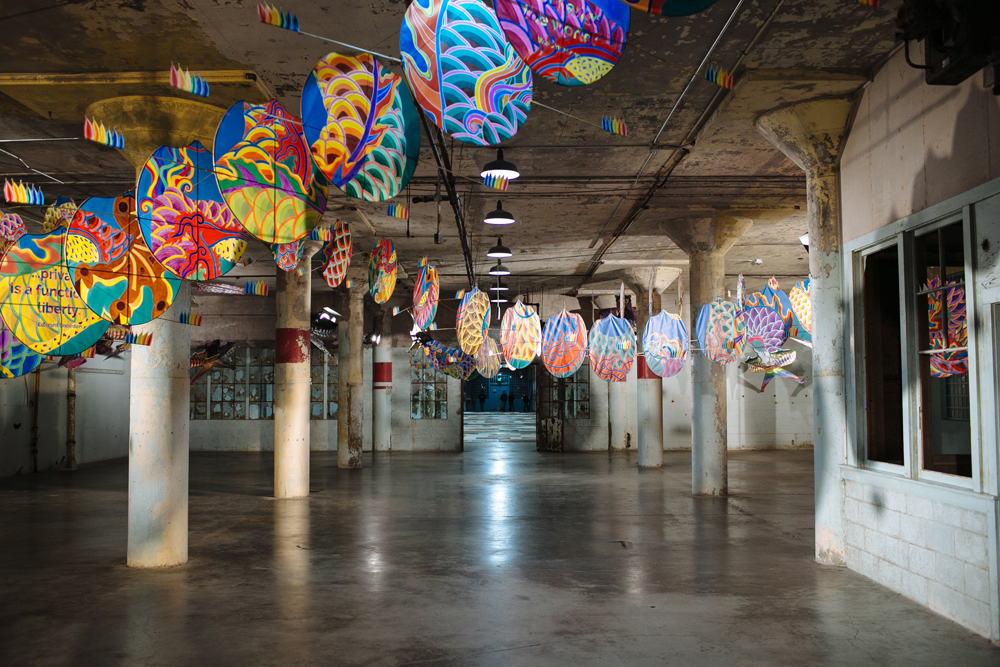 Jackie, it was to my understanding that FOR-SITE worked along-side two other institutions for @Large by Ai Weiwei. The process of anything is essential to the story as a whole, and I’m sure a lot has happened in the making of @Large. How was that process like? What was difficult, and what was extremely important that happened during the process?
JVT: Mounting a large scale contemporary art exhibition is never an easy feat, but it is remarkably difficult when working in a site that:

-the artist has never been to;
-is an island, and is therefore only accessible by boat;
-is one of the nation’s most visited National Parks, with over 1.3 million annual visitors;
-is a protected federal historic and cultural resource, as well as a sanctuary for colonial nesting seabirds.

These factors, among innumerable others, made developing and installing this exhibition an ongoing exercise in creative problem solving: Acquiring and shipping over 1.2 million LEGO bricks required to make “Trace;” moving and assembling “Refraction” – a sculpture weighing over 5 tons – entirely by hand and without the use of noise-generating power tools so as not disturb the protected seabirds that were nesting on the western side of the New Industries Building; loading in the artworks at night and by barge when the island was closed to visitors. Imagine the coupling such challenges with the fact that they had to be handled surreptitiously, as it was the wish of the artist that absolutely no information about the works be released prior to the exhibition opening!

With all of the challenges we faced during the development and installation of the exhibition, ultimately none of them would have been surmountable if it wasn’t for the support and collaboration of our partners. 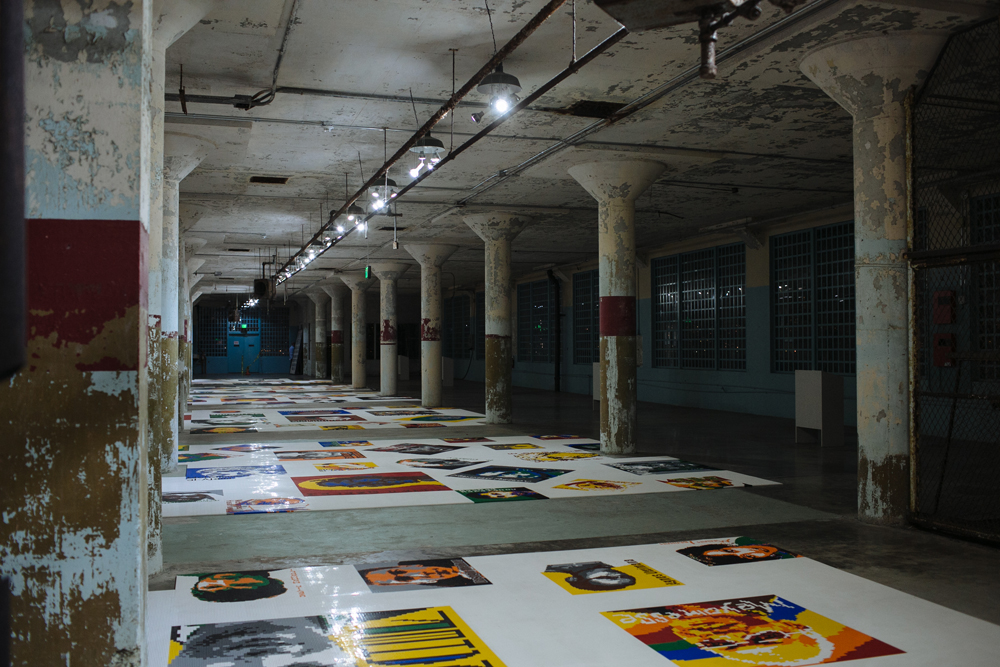 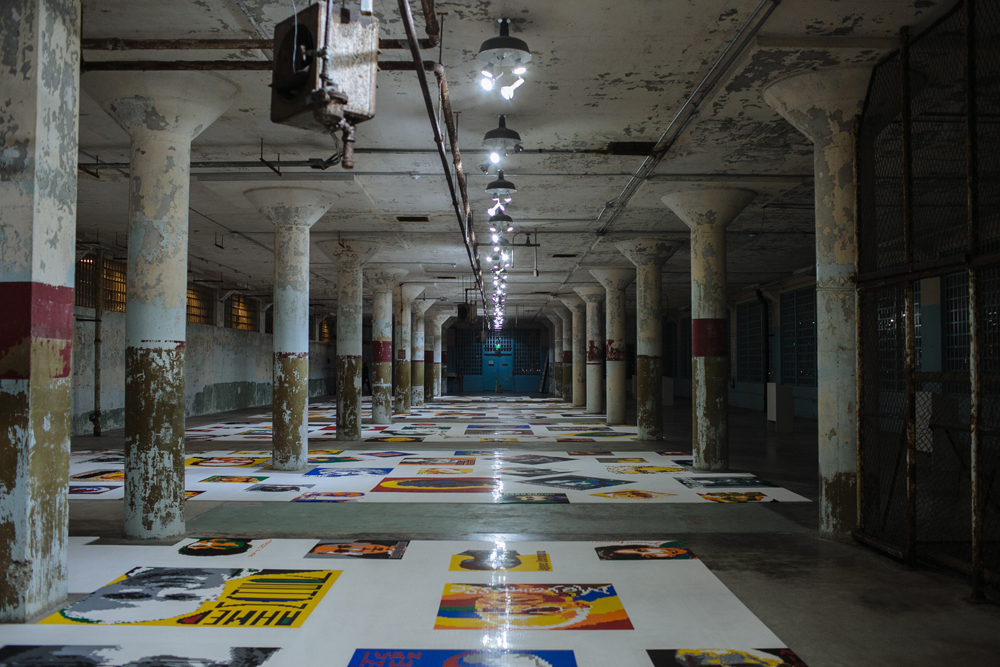 Tyler, what were some key points/events that happened during the process that you oversaw?
TR: Every day coordinating the “Trace” assembly was memorable, but also a blur. The hours were long and the clock was ticking. I think what most impacted me was the level of dedication demonstrated by our volunteers. None of these people were paid and almost all of them returned to work additional days for which they weren’t originally scheduled. As the installation deadline neared, we were still in need of volunteers to help us complete the portraits on Alcatraz itself (we did the lion’s share of the work off-site inside the former Exploratorium space at The Palace of Fine Arts). Our volunteers responded on extremely short notice and ensured that we finished everything on time. I cannot stress the following enough: “Trace” would have not been possible without the generosity and energy of our volunteers. They were/are phenomenal.

How many hours were put in, and how many volunteers were involved?
TR: For the “Trace” assembly, 82 volunteers gave 1,620 hours of their time.

And how did Ai Weiwei respond?
TR: He is extremely pleased with the effort. He designed the assembly of “Trace” to be participatory and to involve members of the local community. It worked really well, and he’s moved by the result. 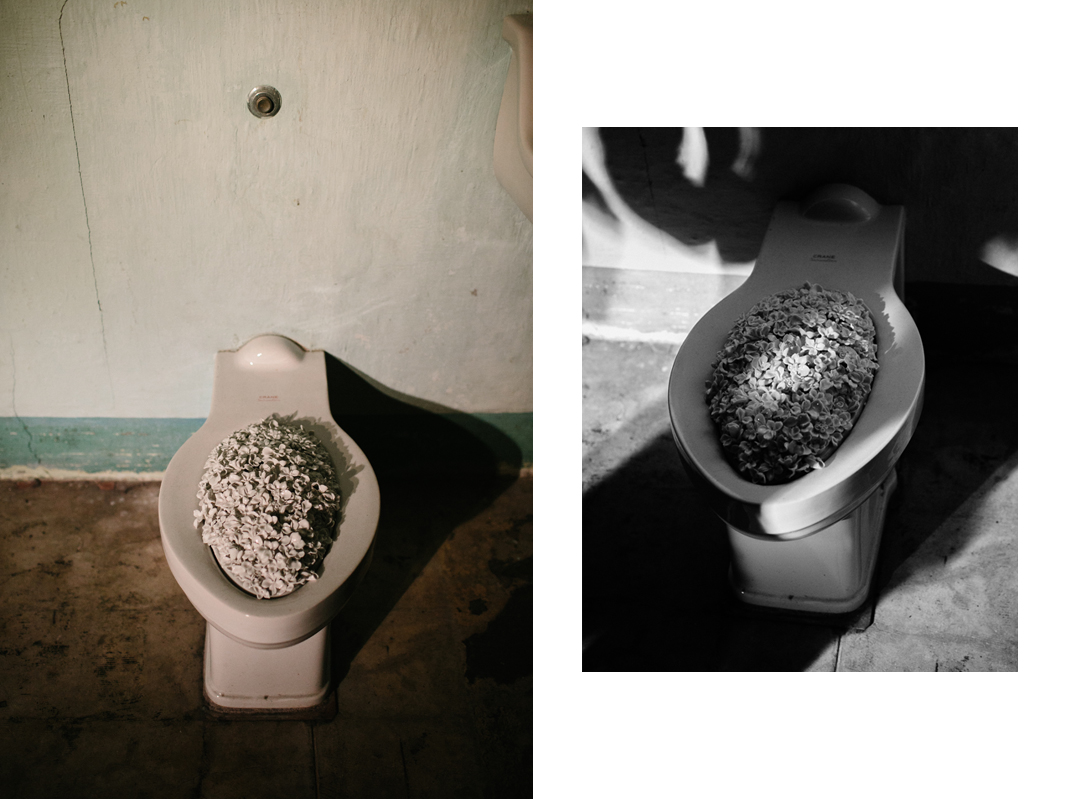 Ai Weiei’s work is capable of making noise that can be heard throughout the world. Is there anything about him that moves you? How did this allow you to maintain an interest throughout the making of @Large?
JVT: Working with the artist and his studio from the inception of the exhibition through to its opening has been a fascinating, incredible experience. It was clear to me from the beginning of this project that Ai not only had the site and its layered history as a place of detainment and protest very much in mind when conceiving the works, but the exceptional diversity of the audience equally so.

TR: For me, his willingness to take a stand on such critical topics while putting himself at risk to do so is the most inspiring aspect of what he does. The Chinese authorities have him under 24/7 surveillance, and he’s not allowed to leave the country. They monitor his communications and are well aware of what he is saying about the Chinese government. All of this puts him at risk to be incarcerated again. However, he has managed to develop a platform by which to speak about human and political rights, and a lot of people are paying attention. He is far more outspoken than a lot of people who actually have the freedom to talk about human rights without putting themselves in danger. This is what I try to stay in touch with as I continue to work on @Large.

I really like the fact that his work is simultaneously simple and layered. His use of common, well known materials – bicycles, rebar, Legos, stools, etc. to illuminate larger, more complex ideas about the world is fascinating. The more I consider the ingenuity of what he is doing, the more my head starts to spin, and the more I want to think about what he might be getting at. Plus, there always seems to be an emotional core to the works – I always have a visceral response in my body to his work. I’m not always sure what I’m feeling, but the feeling is strong.

Please take the time to see @Large by Ai Weiwei on Alcatraz, which will be ending on April 26, 2015. For more information on tickets and the event, visit for-site.org

THE BEST ART SHOWS I SAW AROUND THE WORLD IN 2014