What Do You See? :: The "Reverse Rodney" Graphic, Explained

On the night of March 3, 1991, after trying to evade police in a high-speed chase, an African-American taxi driver named Rodney King was stopped, surrounded and beaten by LAPD officers. A witness’ home video recording of the scenario was broadcast on the local news – grainy black-and-white footage of figures circling a crumpled body, taking turns to batter and strike King’s floundering body against the asphalt. That pre-YouTube video went viral across the media, a haunting visual of power, hate, and imbalance that led to the sensational trial (and acquittal) of the officers, and the precipitation of the 1992 Los Angeles riots.

A quarter of a century later, we haven’t moved far in regards to our police-community relations. It can even be argued that the situation has worsened. After a string of senseless attacks on Blacks (which, continues) at the hands of law enforcement across the country, we now have an active Black Lives Matter movement to call attention to the police’s disparate treatment. In response, a confused and misguided All Lives Matter movement sought to neutralize and silence BLM. In an even stranger twist, many cops are now claiming to be the victims, so we even see a Blue Lives Matter out there to raise awareness for law enforcement’s plight. It’s as if the tables have turned and the police have now metaphorically taken King’s place on the floor. Instead of batons and boots, they face the onslaught of the media, an angry America, a voyeuristic and scrutinizing public. Now, instead of one video camera capturing the discord, there are millions. 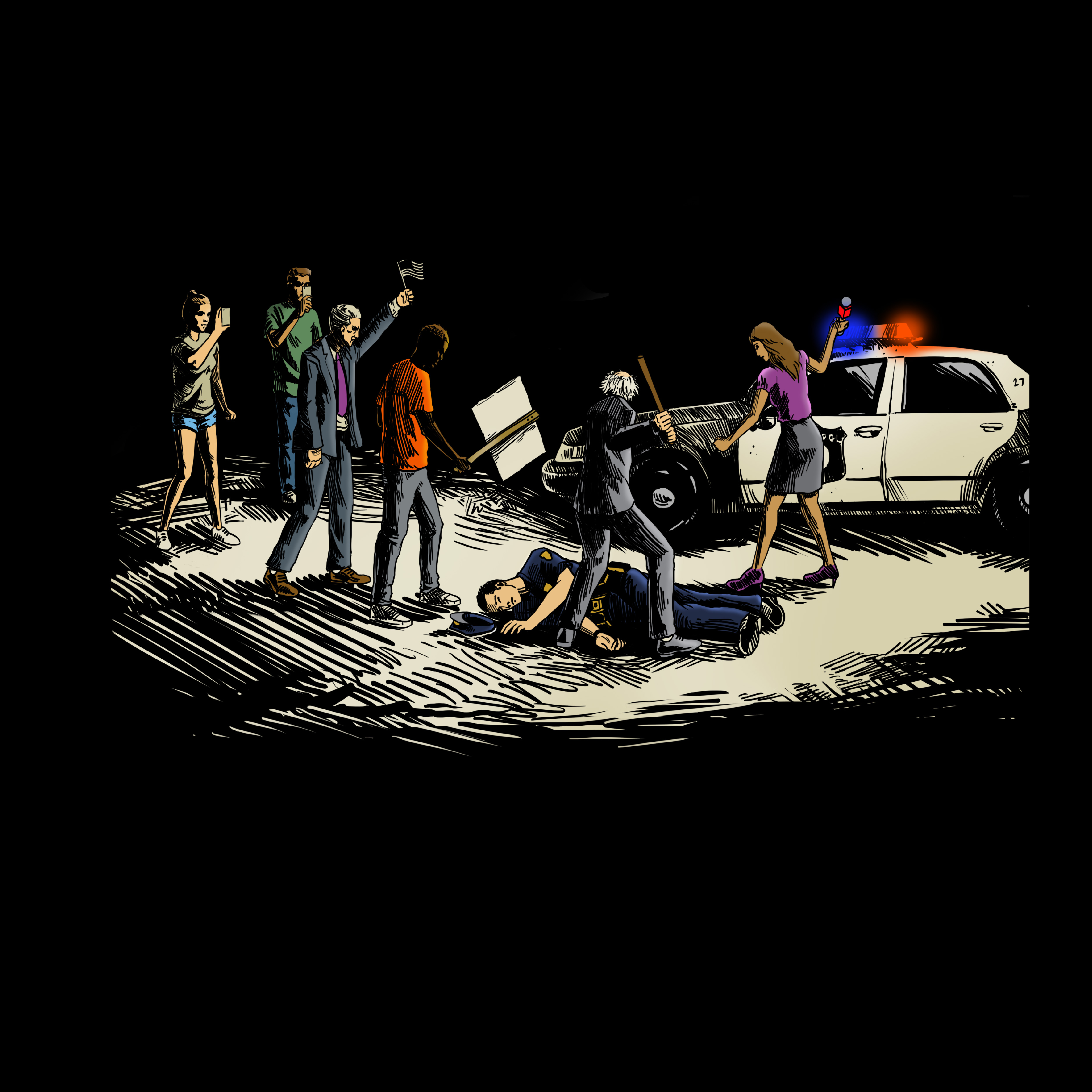 I came up with this T-shirt idea earlier this year, and have leaked it here and there (through my newsletter and Office Hours pop-up shop) to stoke the conversation. I’ve gotten a lot of unfollows on social media, but then again I’ve had LAPD cops buy a shirt (or two!) for themselves. The image calls for such a visceral response, that there are those who’ve exclaimed: “It’s our turn now!” and then critics who decry the graphic for promoting violence against cops (that’s not the intent).

Regardless, there remains a sharp and widening disconnect between the American public and the police, which has always seemed odd considering it is in law enforcement’s duty to protect and serve the people. What do you see when you look at this shirt – empathy or division? I’ll leave the rest up to you.

We are now releasing the “Reverse Rodney” T-shirt under the Wildfire Association department of our Online Shop. This new Members Only section is reserved exclusively for those who have created an account on thehundreds.com.

Jay and Silent Bob on RSWD

TWILIGHT OF THE MALLRATS :: A Eulogy for Our Monuments to Mass Consumerism

EYE ON THE PRIZE :: Celebrating the Timelessly Trippy Art of Rick Griffin